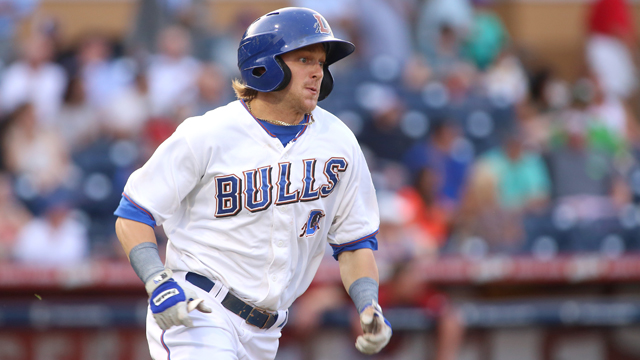 Taylor Motter went 2-for-4 with a walk and a run scored in Durham's 5-4, 10-inning loss Saturday

DURHAM, NC - The Durham Bulls fell in 10 innings to the Columbus Clippers Saturday night at the DBAP, dropping a 5-4 decision to lose their fourth straight contest.

Tied 2-2 entering the 10th inning, Adam Moore led off with a double for Columbus that centerfielder Corey Brown lost in the lights. After a strikeout, groundout and intentional walk, Carlos Moncrief then hit a three-run homer to rightfield, putting the Clippers ahead by three. Durham did not go quietly in the bottom of the frame, as JP Arencibia cracked a two-run homer over the Blue Monster to cut the deficit to 5-4. The ensuing two batters were retired though, ending Durham's bid to end its losing streak.

For the third straight game the Clippers (38-32) scored first, as in the third inning Michael Martinez led off with a single, and Moore followed with a single of his own. After a sacrifice bunt, Jose Ramirez singled to centerfield, scoring Martinez.

In the bottom of the frame Durham (39-31) countered, as Taylor Motter led off with a double down the leftfield line. After a fly out and a walk, Vince Belnome hit a grounder in the hole between first and second base. The throw to second base got one out, but the relay to first was errant, and allowed Motter to score all the way from second base and tie the game.

In the sixth Columbus re-took the lead when Jesus Aguilar singled with two outs and came around to score a batter later on an RBI double by Lonnie Chisenhall. The Bulls evened the contest in the bottom half of the seventh, as Brown walked and Motter singled to advance Brown to third. Mikie Mahtook then delivered a sacrifice fly to deep rightfield to score Brown and even the score.

Right-hander Austin Adams (2-2) picked up the win with 1 2/3 innings of scoreless relief, while CC Lee earned his second save of the year, despite allowing a pair of runs in the 10th. Righty Jhan Mariñez (3-1) suffered the loss, surrendering Moncrief's three-run homer in extras.

The Bulls try to avoid the sweep in the series finale Sunday at the DBAP. LHP Matt Moore (NR) makes the start for Durham on Major League rehab, while the Clippers have yet to name a starter. First pitch is scheduled for 5:05 p.m.