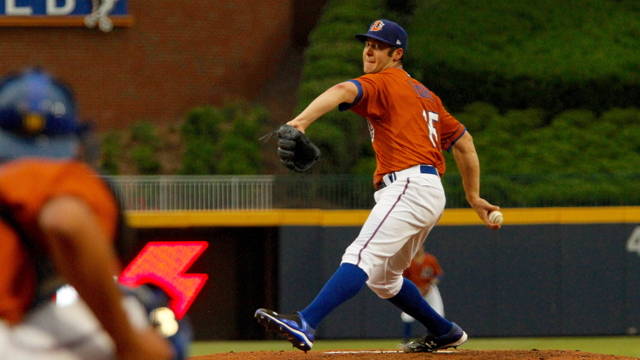 DURHAM, NC - The Durham Bulls fell to the Columbus Clippers 7-1 Thursday night in the opener of a four-game set, playing just 5 ½ innings before the game was called because of rain.

Just three batters into the game Jesus Aguilar got the Clippers (36-32) off to a good start, cracking a two-run homer over the Blue Monster. In the second the visitors continued to pour it on, as Aguilar delivered a bases-loaded single to score a pair with two outs, before Lonnie Chisenhall drilled a two-run double to centerfield for a 6-0 advantage.

Durham (39-29) got on the board in the third inning, as Eugenio Velez walked with two outs, and scored on the next play when Taylor Motter delivered a RBI double to centerfield to cut the Bulls' deficit to five.

After two scoreless frames Columbus struck again though, when Michael Martinez blasted a solo home run into the rightfield seats leading off the sixth inning.

Southpaw Michael Roth (6-2) earned the win, going all five innings for the Clippers and allowing just one run on three hits. RHP Dylan Floro (7-5) suffered the loss, losing for the first time since May 16th by surrendering six runs on nine hits over five innings.

Motter tallied two of Durham's three hits, extending his hitting streak to 14 games, while Allan Dykstra went 1-for-1 to account for the Bulls' final hit.