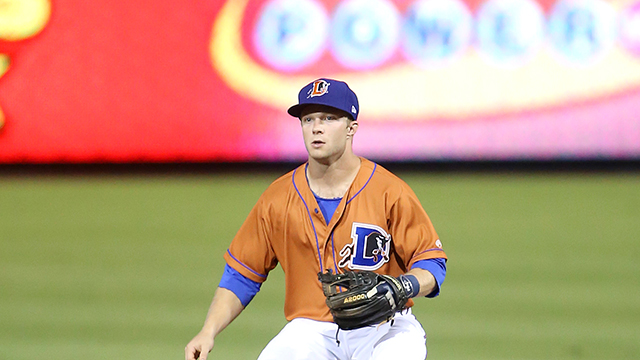 Columbus, OH --- A wind-blown popup scored two runs in the first to lead the Columbus Clippers by the Durham Bulls 3-1 in the opening game of Saturday's doubleheader. The second game was postponed due to inclement field conditions.

Former Bulls outfielder Jerry Sands went 3-3 to lead Columbus (40-35) to its fifth win over the Bulls (40-35) without a loss. Sands lofted a two-out pop up in the first against rehabbing starter Matt Moore. With runners at second and third breaking on contact, the popup was blown away from first baseman Richie Shaffer and second baseman Ryan Brett saw the ball land well wide of him on the second base dirt to score two runs.

Brett homered in the fourth against Jarrett Grube (W, 2-0) to draw the Bulls within a 2-1 score.

In the fifth, Alexi Casilla threw away a would-be inning-ending double play grounder, allowing Jesus Aguilar to single home an unearned run to push the lead to 3-1.

Shawn Armstrong (S, 10) worked two innings to earn his 10th save in 11 opportunities.

Between games, both manangers, along with crew chief Carlos Torres and the GM of the Clippers assessed the outfield conditions, which were deemed unplayable due to rain on Friday and a constant mist throughout the opener of the doubleheader.

Consequently, the Bulls and Clippers will attempt to play two on Sunday beginning at 4:05 PM ET.