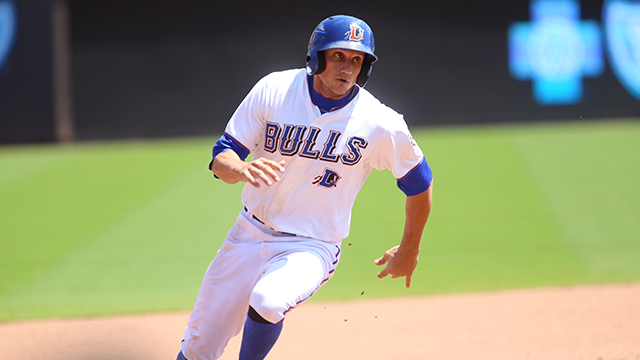 DURHAM, NC - In front of 10,640 fans Sunday evening, the Durham Bulls defeated the Syracuse Chiefs 3-0 to complete the sweep of the three-game set.

Five Durham pitchers combined on the team's fifth shutout of the season, as RHP Matt Andriese (1-0) spun five frames, allowing just three hits and striking out six to earn the win. Jim Miller (1.1 innings), Andy Oliver (0.2), Preston Guilmet (1.2) and Ronald Belisario (0.1) combined to preserve the shutout, with Belisario earning his 13th save, third in the last three days and fifth in the last six games.

The Bulls (29-23) scored in the first inning, when Ryan Brett singled to lead off the frame and scored three batters later on a double off the rightfield wall from Allan Dykstra. In the second the home side doubled its lead when Brett lifted a sacrifice fly to leftfield to score Corey Brown, who walked to lead off the frame.

In the seventh Durham added some insurance when Taylor Motter was hit by a pitch, stole second base, and scored on an RBI double to centerfield off the bat of Mikie Mahtook.

Over the first six games of the Bulls' nine-game homestand, the squad is 5-1, and overall is 8-1 in its last nine games. Today's paid attendance marked the third sellout in as many days - bringing the weekend total to 30,988 - the first time in ballpark history it's sold out on three consecutive days.

The Bulls have an off day Monday before resuming play on Tuesday against the Charlotte Knights. RHP Dylan Floro (4-4, 3.54) gets the start for Durham against RHP Kyle Drabek (1-2, 2.25) for Charlotte. First pitch is scheduled for 7:05 p.m.