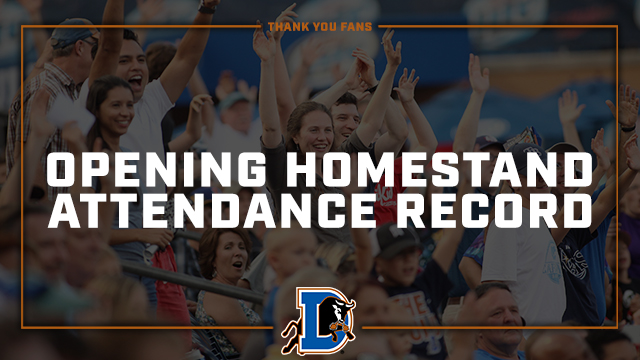 Through the season's first homestand, the Bulls hosted three sold-out crowds, while posting an average attendance of 7,461. Entering Monday, the Bulls ranked second among all Minor League Baseball teams in total attendance.

"We just can't say enough about how dedicated our fan base is to this organization, and how thankful we are," Bulls General Manager Mike Birling said. "After a long offseason the team came back for a week-long homestand, and our fans came out to support them like never before. It was a fantastic week of Durham Bulls baseball at the DBAP, and we look forward to more big things for the 2017 season."

As part of the record-breaking homestand, 3,012 hats and 2,215 t-shirts were purchased from the Ballpark Corner Store. Additionally 20,000 hot dogs, 30,000 pints of beer, 170,000 ounces of Pepsi products and 632 Tater Tot Waffles were sold from various concessions stands. Throughout the course of the seven days, the team garnered over a combined 1.2 million impressions on social media between Facebook, Twitter and Instagram.