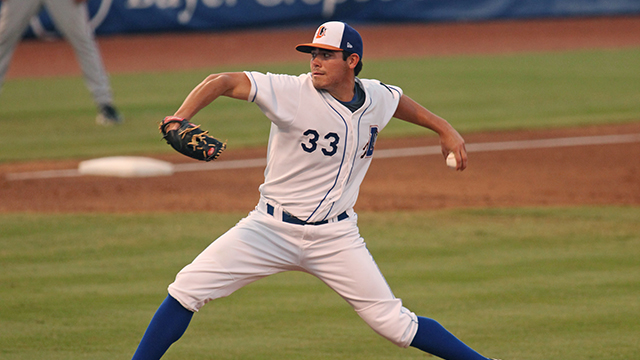 For the third time in four games in the series, the Clippers (39-32) scored in the top of the first as Jose Ramirez doubled to lead off the game before scoring two batters later on an RBI single by Jesus Aguilar. The Bulls responded with a run in the bottom of the frame on a solo homer by Corey Brown, before Luke Maile drilled a solo homer in the second stanza as Durham (39-32) took a 2-1 lead.

Columbus used the long ball to its advantage in the fourth frame though, when James Ramsey and Carlos Moncrief hit back-to-back dingers to pull back in front by a run. The visitors extended their lead in the sixth inning when Brett Hayes blooped a single to centerfield, scoring Ramsey for a 4-2 advantage. The Clippers closed the game's scoring in the seventh inning when Tyler Holt doubled and scored two batters later on a single by Lonnie Chisenhall.

In his first rehab start with Durham - and fourth overall - southpaw Matt Moore (0-1) took the loss, allowing three runs on seven hits in 5 1/3 frames. The lefty struck out seven and walked just one, while throwing 92 pitches, 67 for strikes. Right-hander Jarrett Grube (1-0) picked up the victory for Columbus, surrendering just two runs in five innings, while Shawn Armstrong earned his ninth save of the season with a scoreless ninth inning.

After an off day Monday, the Bulls' seven-game homestand continues with the first of three games against the Toledo Mud Hens Tuesday night. Durham sends LHP Everett Teaford (4-5, 5.63) to the hill opposite RHP Buck Farmer (6-2, 3.56) for the Mud Hens. First pitch is scheduled for 7:05 p.m.