Durham Walks Off in Extras to Complete Sweep 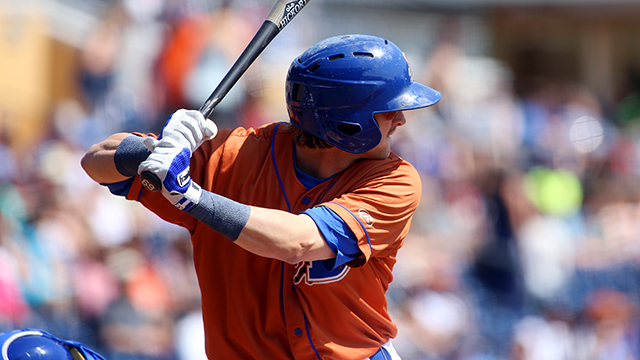 DURHAM, NC - The Durham Bulls finished off the three-game sweep of the Lehigh Valley IronPigs Wednesday afternoon at the DBAP, earning a 9-8, 12-inning win on Taylor Motter's walk-off single.

With the bases loaded and one out in the 12th inning, Motter drove a ball to deep centerfield, scoring Hak-Ju Lee and propelling the Bulls to their fourth straight victory.

Not lost in the late-inning heroics though was the pitching of infielder Leonardo Reginatto (1-0), who in his first career pitching appearance tossed three scoreless innings and allowed just two hits. Starting the game at second base, Reginatto also went 1-for-5 at the dish with an RBI, while reaching on a hit-by-pitch in the 12th.

The teams traded runs in the first inning, before Durham (35-26) jumped out to a 3-1 lead after the third inning, when Allan Dykstra tallied a sacrifice fly and Richie Shaffer delivered an RBI double. The visitors struck for a pair of runs in top of the fifth to tie the game, but the Bulls countered with four in the bottom of the inning, highlighted by a two-run homer from Shaffer for a 7-3 advantage.

The IronPigs plated a run in the sixth and the eighth, while Durham scored a run in the eighth as well for an 8-5 lead. Lehigh Valley (21-40) tied the game in the top of the ninth though, when former Bull Russ Canzler cracked a three-run homer, making it an 8-8 ballgame.

Shaffer led the Durham offense, going 3-for-5 with three RBIs and a run scored, while Motter finished 3-for-7 with a pair of runs and an RBI. Dykstra tallied a pair of hits and two RBIs, while Lee went 3-for-5 with a run scored and a walk in Durham's 16-hit attack.

Right-hander Jason Berken (3-4) suffered the loss for Lehigh Valley, allowing one run on two hits and a walk over 2 1/3 innings.

With the win the Bulls improved to a season-best nine games over .500, and swept Lehigh Valley at the DBAP for the first time since the 'Pigs' inaugural season of 2008.

Durham hits the road for a seven-game road trip beginning Thursday, when they take on the Louisville Bats at 7:05 p.m. The Bulls send LHP Everett Teaford (3-5, 6.95) to the mound opposite RHP Donovan Hand (1-2, 4.15) for the Bats.