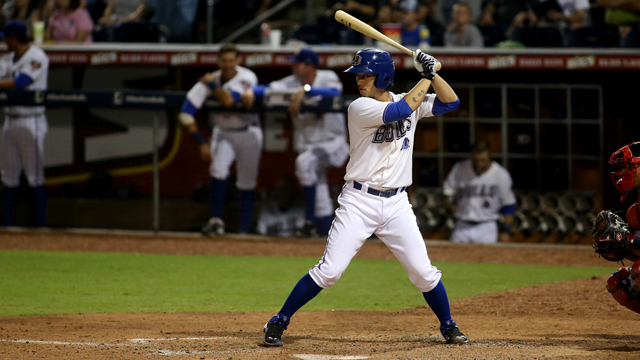 DURHAM, NC - The Toledo Mud Hens took the rubber match of a three-game set Thursday night at the DBAP, defeating the Durham Bulls 10-7.

After a 2 hour and 52 minute rain delay, Toledo (33-41) jumped on the board in the first inning on a leadoff homer by Xavier Avery. The Mud Hens plated a pair on a two-run homer by Tyler Collins in the second, before scoring twice more in the third behind four hits for a 5-0 lead. The advantage grew in the fourth on an unearned run, before Mike Hessman drilled a solo dinger in the fifth for a seven-run lead.

Durham (40-34) stormed back in the sixth though, scoring seven times to tie the ballgame. First, Taylor Motter drove home Ryan Brett with an RBI double. Two batters later JP Arencibia cracked a two-run homer over the Monster to cut the deficit to four. Three batters then reached in succession, setting the table for Hak-Ju Lee to hit a grand slam to rightfield, tying the game at 7-7.

The visitors took the lead for good in the eighth though, scoring on a two-out double by Avery, before extending their lead to three in the ninth on a two-run dinger by Collins, his second of the night.

Righty Rafael Dolis (4-2) earned the win for the Hens, despite allowing four runs on three hits over 1 1/3 innings, while Ian Krol picked up his first save of the year with two scoreless innings. Southpaw CJ Riefenhauser (0-2) suffered the loss, surrendering the go-ahead run in the eighth inning.

Although the game was played in its entirety, it was announced fans could use their tickets from tonight as rain checks for any remaining regular season game, based on availability.

Durham hits the road Friday for the first game of a three-game set against the Columbus Clippers. The Bulls will send rehabbing LHP Matt Moore (0-1, 5.06) to the hill opposite RHP Jarrett Grube (1-0, 3.60) for the Clippers. First pitch is set for 7:15 p.m.