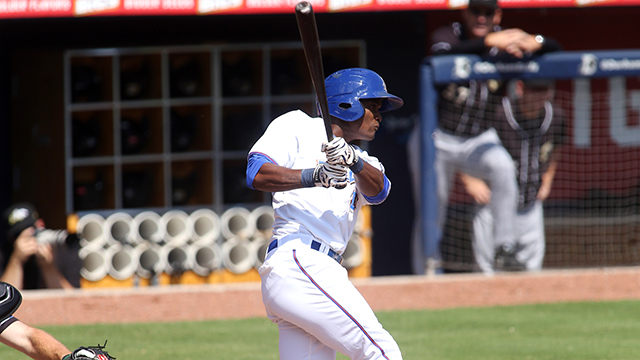 Lawrenceville, GA --- Dylan Floro stymied the Gwinnett Braves into the eighth inning, with Ronald Belisario putting the finishing touches on a 2-0 Durham victory in the series finale on Sunday afternoon.

Floro (W, 6-4), who threw six innings of one-hit ball in Lawrenceville on Opening Day against the Braves, outdid himself before a batted ball knocked him out of the game prematurely. Floro had blanked the Braves (27-28) on three hits through seven innings, utilizing just 61 pitches before two reached against him in the eighth inning. Jose Peraza then clubbed a pitch back at the mound, deflecting off Floro's forearm, which ultimately forced him out of the game. Ronald Belisario (S, 15) entered to retire Cedric Hunter on a flyball with the bases loaded, then polished off the shutout in the ninth as the Bulls avoided a three-game sweep.

Durham (32-26) took a 2-0 lead in the fourth against Matt Wisler (L, 3-4). After singles by Taylor Motter and JP Arencibia, Allan Dykstra doubled off the glove of right fielder Joe Benson, who was diving against the line. Eugenio Velez followed with a line single to right-center to score the second run.

The Bulls moved into a second-place tie with Charlotte, one game behind first-place Norfolk. Matt Buschmann (5-4, 3.15) starts the series opener at the DBAP on Monday night against Lehigh Valley at 7:05 PM ET.