1st AB Back From Tampa Bay Wins Game In 9th 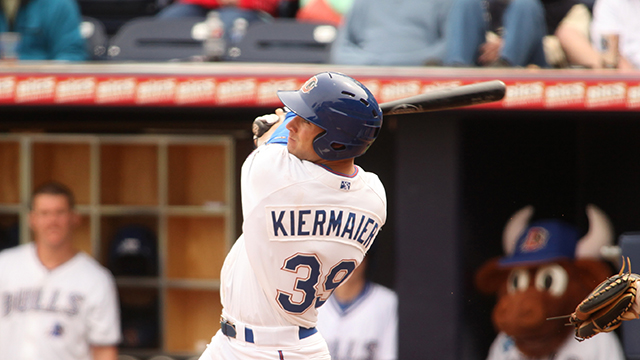 Columbus, OH --- Kevin Kiermaier smashed a tie-breaking, two-run double high atop the right field wall to lead the Durham Bulls past the Columbus Clippers on Thursday night 7-5 at Huntington Park.

Just four days after hitting his first major league home run, Kiermaier creamed an offering from Vinnie Pestano a mere inches from the yellow line at the top of the tall right field wall. Curt Casali and Jayson Nix scored to give the Bulls (27-21) a 7-5 lead.

Kirby Yates (S, 12) notched his league-leading 12th save by whiffing Jesus Aguilar as the tying run to end the game.

The Bulls held a pair of two-run leads early in the contest, but Enny Romero and Brandon Gomes were unable to hold them. Romero labored through four innings on 96 pitches, departing with a 4-2 lead. Romero permitted a two-run homer in the second inning to see the first of Durham's leads disappear.

After a perfect fifth, Gomes surrendered an RBI-single, followed by a two-run shot by George Kottaras to give Columbus (22-23) a 5-4 lead.

The Bulls tied the game in the eighth on a single by Vince Belnome.

Mikie Mahtook clubbed a two-run double in the first inning to give Durham its first lead. A pair of sac flies in the fourth by Belnome and Casali put the Bulls up 4-2.

Jake Thompson (W, 2-0) earned the victory in relief by recording two outs in the eighth, including a strikeout of Ryan Rohlinger with the go-ahead run at third and one out.