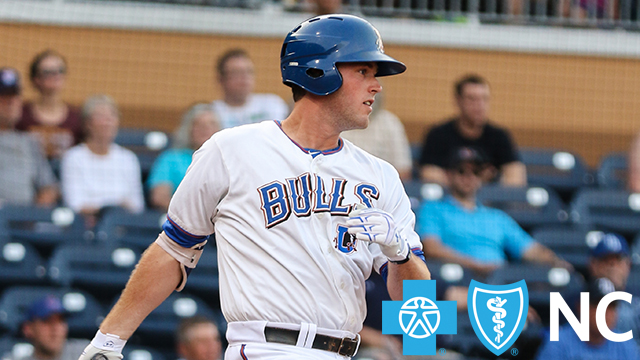 DURHAM, NC - The Charlotte Knights plated a run in the top of the 13th inning Sunday evening at the DBAP, beating the Durham Bulls 4-3 in the rubber match of a three-game set.

Leury Garcia singled to lead off the 13th, and advanced to second on a sacrifice bunt for Charlotte (53-69). A passed ball advanced him to third, and the leadoff hitter scored the go-ahead run on a wild pitch later in the frame. In the bottom of the inning the Bulls (54-68) went down in order to lose for the sixth time in their last seven games.

Durham was trailing 3-1 entering the sixth inning, but Casey Gillaspie singled home Daniel Robertson in the sixth to make it a one-run game. In the seventh Jake Goebbert cracked a solo homer to right, tying the contest at three.

The home side was the first to get on the board when Gillaspie scored on a sacrifice fly off the bat of Hank Conger in the second frame, but the Knights took the lead in the fourth stanza behind a two-run home run and a squeeze bunt.

Brad Goldberg (2-5) picked up the victory for the visitors with two innings of scoreless relief, while Matt Purke earned his first save of the campaign with a scoreless final inning. Ryne Stanek (1-3) took the loss after allowing an unearned run in the 13th.

Gillaspie finished 3-for-6 with an RBI and a run scored, while Goebbert finished with three hits as well. Taylor Motter contributed a 2-for-6 game as the Bulls finished with 12 hits, but went just 2-for-8 with runners in scoring position.

The Bulls open a three-game series Monday against the Columbus Clippers at Huntington Park. RHP Eddie Gamboa (5-3, 2.49) takes the mound for Durham while RHP Adam Plutko (4-4, 4.14) pitches for Columbus. First pitch is scheduled for 7:05 p.m.