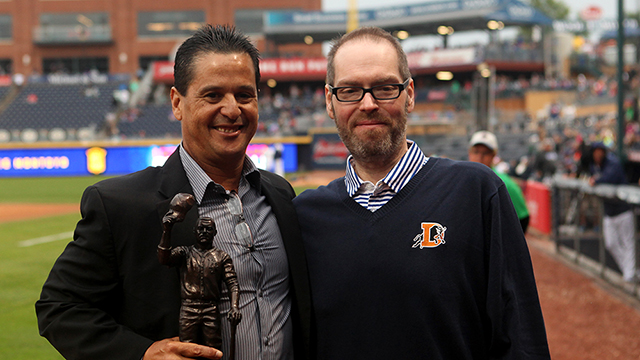 Saunders (right) with longtime manager and friend Charlie Montoyo in 2016

Saunders served the same role for the Durham Bulls since 2003, and had been a member of the Tampa Bay organization since 2000, when he was the Clubhouse Manager for the system's Double-A team in Orlando. The Florida native also worked at Tampa Bay's Spring Training facility every season since joining the organization.

"Today is a tough day for our Durham Bulls family," said Mike Birling, Bulls general manager and close personal friend of Saunders. "Colin was an important part of our front office for 14 years, and many members of our staff have story after story of memorable times they had with him. The DBAP won't be the same for many people, from our front office to our coaching staff to our players, knowing we've lost a true friend."

Over Saunders' tenure in Durham, he worked with a pair of International League Hall of Fame managers in Bill Evers and Charlie Montoyo, and had current Bulls' skipper Jared Sandberg as a player from 2003-2005. In addition he worked with future MLB All-Stars Evan Longoria, Chris Archer, Ben Zobrist, Matt Moore, Wil Myers and James Shields, and other high-profile players such as B.J. (Melvin) Upton, Kevin Kiermaier and Jeremy Hellickson.

In addition to his duties as clubhouse manager, it was not uncommon to find Saunders roaming the front office throughout a given homestand. The team's staff particularly became accustomed to Saunders' strong opinions on his love of the band Coldplay, his fierce fandom of the Notre Dame Fighting Irish, and his intense appreciation of the Star Wars movie franchise.

Saunders is survived by his beloved mother and brother, and a very large, cherished baseball family.