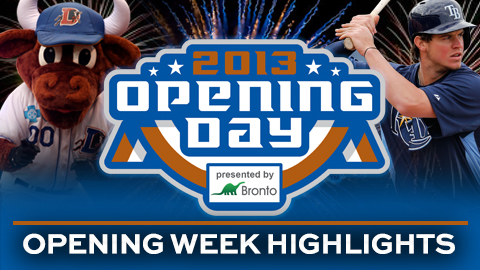 After a four game road trip starting in Norfolk this Thursday, the Durham Bulls will kick off the home portion of their 2013 International League season on Monday, April 8.  Boasting one of the most exciting rosters in recent memory, the Bulls will return to the DBAP for Opening Day festivities highlighted by a ceremonial first pitch thrown by North Carolina State Trooper Mike Potts. Potts, who pitched for the 1992 Durham Bulls, was recently shot and seriously injured in the line of duty.

Triple-A Baseball officially returns to the Triangle on Monday, April 8 at 6:05pm when Bronto Software presents Opening Day at the DBAP.  Gates open at 5:00pm for the contest against the division rival Gwinnett Braves, giving fans plenty of time to enjoy pregame festivities that will feature a special entrance by Wool E. Bull, full roster introductions, first pitch ceremony with Trooper Potts, and National Anthem performed by the 100 Men in Black male chorus. Immediately following the home opener, fans will be treated to the first fireworks show of the season.

The Bulls and Braves continue the season's opening homestand on Tuesday, April 9. Tuesday's 7:05pm game will be the first AAA Membership Card Night of the year. At every Tuesday home game in 2013, fans who show their AAA Membership Card can buy one Terrace Reserved ticket and get one free, courtesy of AAA Carolinas. On Wednesday, April 10, the Bulls will host the first of six midweek day games planned this season. Wednesday's 1:05pm matinee will close out the series with the Atlanta Braves' top Minor League affiliate.

Thursday, April 11 will see the first visit of the year from the Norfolk Tides, Triple-A affiliate of the Baltimore Orioles. Thursday home games at the DBAP (with the exception of July 4) will feature $1 Bright Leaf hot dogs, popcorn and fries. Thursday is also College Night, where students can get a Terrace Reserved ticket and $5 in Bulls Bucks for just $10 or an Outfield Reserved ticket for only $4.99 by entering the promo code COLLEGE (and using a valid .edu email address) when purchasing tickets online at durhambulls.com.

Opening week concludes on Friday, April 12 as the North Carolina Governor's Highway Safety Program's "Click It or Ticket" initiative presents the first Friday Night Fireworks show of 2013.  In addition to having postgame fireworks displays, both Opening Day and Friday, April 12 will feature performances by the Diamond Cutters dancing grounds crew.

The Durham Bulls open 2013 International League play this Thursday on the road versus the Norfolk Tides before returning to Downtown Durham for their home opener on April 8 at 6:05pm.  Tickets for all home games are available at durhambulls.com, by phone at 919.956.BULL, or at the Durham Bulls Athletic Park box office.