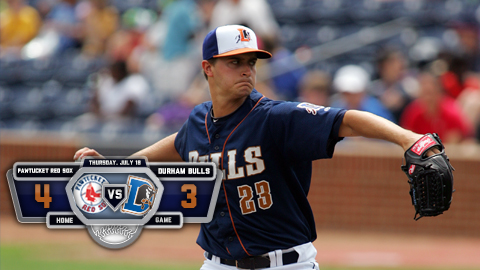 The Durham Bulls saw their eight-game winning streak end with a 4-3 loss to the Pawtucket Red Sox Thursday night at the DBAP.

The All-Star Break came at an inopportune time for the Bulls, as three days off were the last thing the red-hot division leaders needed. Durham was on its longest winning streak since 2010, and sported the best record in professional baseball heading to the break.

After playing nine straight games, and 14 of their last 16, against teams with sub .500 records, the Bulls began the second half by hosting the IL North leading Red Sox.

Pawtucket jumped on Bulls' starter Jake Odorizzi (L, 7-3, 3.41) in the second inning, as the first six batters reached base on two walks, three singles and a bases-loaded double. Pawtucket scored three runs in the inning-one more than Gwinnett scored in the three-game series leading into the All Star Break. The inning could have been worse, but the Bulls threw out two runners at the plate.

Brandon Guyer hit a two-run double in the third to trim the lead to one. After Pawtucket added an insurance run on a fourth-inning sacrifice fly, Tim Beckham's seventh-inning double again cut the margin to one. The Bulls stranded Beckham at third base, however, and Chris Gimenez was stranded at third after leading off the ninth with a single.

Brock Huntzinger (W, 2-0, 2.29) picked up the win in relief, and Chris Martin earned his second save.

The game was paused briefly in the seventh inning for a ceremony in which the Bulls and the City of Durham extended the lease on the DBAP for 20 years, with an option for 10 additional years. The new lease provides for significant renovations at the ballpark, which will begin this offseason.