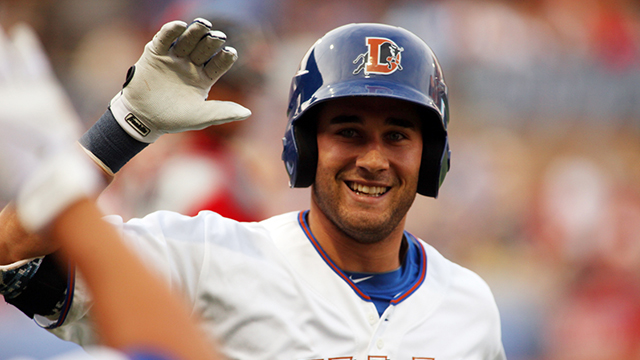 DURHAM, NC - The Durham Bulls started their defense of the Governors' Cup with a 7-6 comeback win over the Gwinnett Braves on Opening Day at the newly renovated DBAP Thursday.

With an Opening Day crowd of 9,483 watching, Durham (1-0) unveiled its upgraded field, stadium lights, and brand-new video boards, among other enhancements to the ballpark.

At the outset, it appeared that the ballpark might be the highlight of the night for Bulls fans. Gwinnett (0-1) jumped out to an early lead on a three-run first-inning home run by Ernesto Mejia off of Bulls starter Nathan Karns. Gwinnett extended it to 6-2 with three more in the third inning to offset a two-run homer by Durham's Kevin Kiermaier in the second frame.

Merrill Kelly, a Bulls starter last year, came out of the bullpen in the third and took the life out of Braves' bats. Kelly scattered two hits and fanned three in three innings, while the Bulls got the comeback started.

Bulls first baseman Jerry Sands doubled and scored in the fourth. In the fifth, Wilson Betemit cracked a two-run homer over the bleachers in right, and Sands made it back-to-back with a blast to right of his own, tying the score. Sands finished 3-for-3 in his Bulls debut, scoring three runs.

In the seventh, Cole Figueroa walked, advanced to third on a wild pitch and Sands single, then scored when Kiermaier beat out a ground ball. Figueroa went 2-for-3 with a pair of doubles while batting out of the three spot in the lineup.

Brad Boxberger (1-0) earned the win in relief, capping 6 1/3 scoreless frames for the Durham pen. Mark Lamm (0-1) took the loss for the G-Braves, allowing a run in two innings of work. Kirby Yates, who notched 20 saves a season ago, picked up his first save of 2014 with a perfect ninth inning.

The Bulls and Braves meet again on Friday at 7:05 p.m. with a Friday Night Fireworks show presented by Duke Energy. LHP Enny Romero gets the ball for Durham against Gwinnett's RHP Ervin Santana.