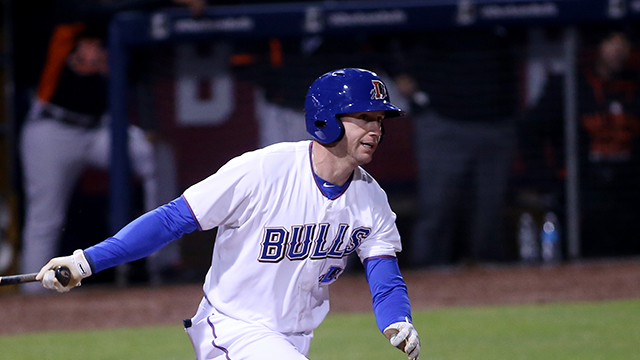 Shaffer homered in the second to start the Bulls' scoring, then drilled a two-run shot in the fifth and a solo homer in the seventh. Shaffer has seven homers in his first 58 Triple-A at-bats, and now is tied for the Rays' organizational lead with 14.

The scoring barrage continued after Shaffer's first bomb, with Durham (37-26) sending 11 hitters to the plate in the second, knocking out Louisville (31-31) starter Dylan Axelrod (L, 3-4) in the process. Hak-Ju Lee doubled home the tying run, with Corey Brown, JP Arencibia and Allan Dykstra collecting RBI doubles in the seven-run frame.

Louisville quickly rallied against Bulls starter Dylan Floro (W, 7-4) with four runs in the second after pushing across two in the first. However, Floro managed to pitch through five innings to win his league-tying seventh game.

Newcomers Robert Zarate and Kyle Winkler combined for the final four innings to close out the victory.

Shaffer drove in four to lead the 15-hit attack, and walked on five pitches in his final at-bat in the ninth.