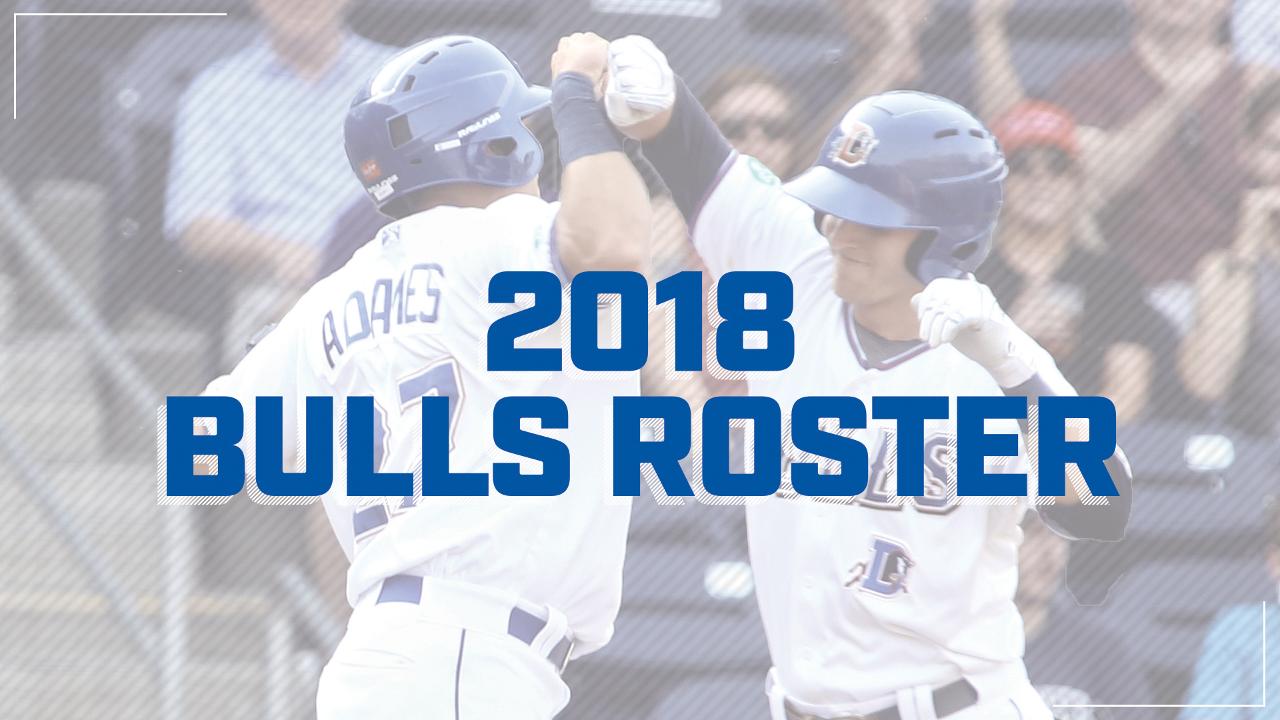 The defending Triple-A National Champion Durham Bulls, in conjunction with the Tampa Bay Rays, today announce the team's preliminary Opening Day roster for the 2018 season. Fourth-year manager Jared Sandberg will pilot a roster comprised of three Top-100 prospects and 13 players who played for the Bulls a season ago.

Headlining the roster will be a talented infield, comprised of Willy Adames (No. 22 overall prospect), Jake Bauers (No. 64) and Christian Arroyo (No. 81). Adames led the Bulls with a .277 average and 210 total bases in 2017, while Bauers split time between left field and first base, slugging 13 home runs and earning Governors' Cup MVP honors. Arroyo embarks on his first season in the Tampa Bay system after he was acquired by the Rays in the trade that sent Evan Longoria to the San Francisco Giants.

Also returning in the infield is Kean Wong , who was named MVP of the Triple-A National Championship Game a season ago when he went 3-for-4 with a grand slam in Durham's 5-3 win over Memphis. Joe McCarthy , who hit .284 for Double-A Montgomery a season ago, and Micah Johnson , who has spent parts of three seasons in the International League, will each see time in the infield as well as the outfield.

Roaming the outfield for the Bulls will once again be Johnny Field , who cracked 12 homers a year ago for the Bulls while also routinely producing highlight-reel catches. Joining him will be Justin Williams , ranked the No. 10 prospect in the Tampa Bay system who is coming off a 14-homer, 72-RBI season for Double-A Montgomery a year ago. A pair of veterans, Jason Coats and Brandon Snyder will round out the outfield contingent, bringing with them a combined 69 International League home runs.

On the mound the Bulls will see a mixture of returners and newcomers as Chih-Wei Hu , Jose Mujica , Anthony Banda and Vidal Nuno are expected to open the season in the starting rotation. Hu is the lone returner of the group after splitting 2017 between a starter and reliever and between Durham and Tampa Bay. Mujica will make his Triple-A debut coming off a season in which he went 13-8 with a 3.03 ERA for Double-A Montgomery, while Banda is a newcomer to the organization after splitting 2017 between Triple-A Reno and the Arizona Diamondbacks. Nuno is the most experienced of the crew, having appeared in 138 Major League games between the New York Yankees, Arizona Diamondbacks, Seattle Mariners and Baltimore Orioles.

Durham will feature a loaded bullpen featuring returners Jaime Schultz , Ryne Stanek , Adam Kolarek , Diego Castillo , Jonny Venters and Hunter Wood . Of the crew Stanek, Kolarek and Wood all saw time with Tampa Bay a season ago, while Schultz and Venters missed significant time with injury. Castillo, who features a fastball that reaches triple digits, was a perfect 4-for-4 in save chances in the playoffs in 2017 and converted seven more in the regular season. New to Durham and rounding out the relief corps will be Ian Gibaut , Cody Hall and Ryan Weber .

Handling the catching duties for Durham will be a pair of veterans in Curt Casali and Adam Moore . Casali has spent parts of the last four seasons in the Bull City, appearing in 183 games for the Bulls, while Moore spent the last three seasons with International League foe the Columbus Clippers.

RHP Brent Honeywell , the system's No. 1 overall prospect, is expected to miss the entire 2018 season recovering from Tommy John surgery performed in March.