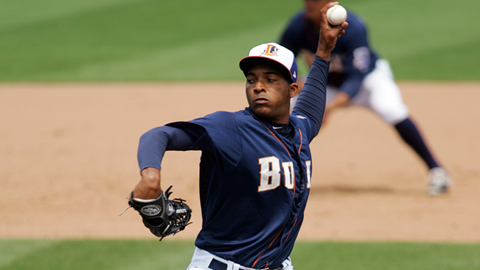 Columbus, OH --- Ezequiel Carrera scored from first base on a wild pickoff throw in the seventh as the Columbus Clippers defeated the Durham Bulls 5-4 at Huntington Park.

Frank DeLosSantos had just entered the game behind Mike Montgomery, inheriting Carrera at first base. Before he made his first pitch, he made an errant, flat-footed throw past Vince Belnome, that caromed into the right field bullpen. Shelley Duncan raced in from right field to dig the ball out, but Carrera's speed carried him all the way around to score before Duncan's throw arrived to put the Clippers (52-59) ahead 5-4.

The Bulls (69-41) split their four-game series with Columbus, but took the season-series 5-3.

Vince Belnome started the night for Durham with a first inning home run to right against Matsuzaka, clearing the right field wall for his eighth of the season.

In the second, Mike Fontenot charged a first pitch by Matsuzaka clearing the entire right field wall landing on the street behind the stadium for a 2-0 lead.

Columbus tied the game in the bottom of the second against Montgomery. The first three Clippers reached, with former Bull Matt Carson singling home a run into left field. A Roberto Perez grounder evened the game at 2-2.

The Bulls took a 4-2 lead in the fourth on a two-out, two-run single by Fontenot, but Montgomery surrendered a game-tying homer to Juan Diaz in the last of the fourth to even the score 4-4.