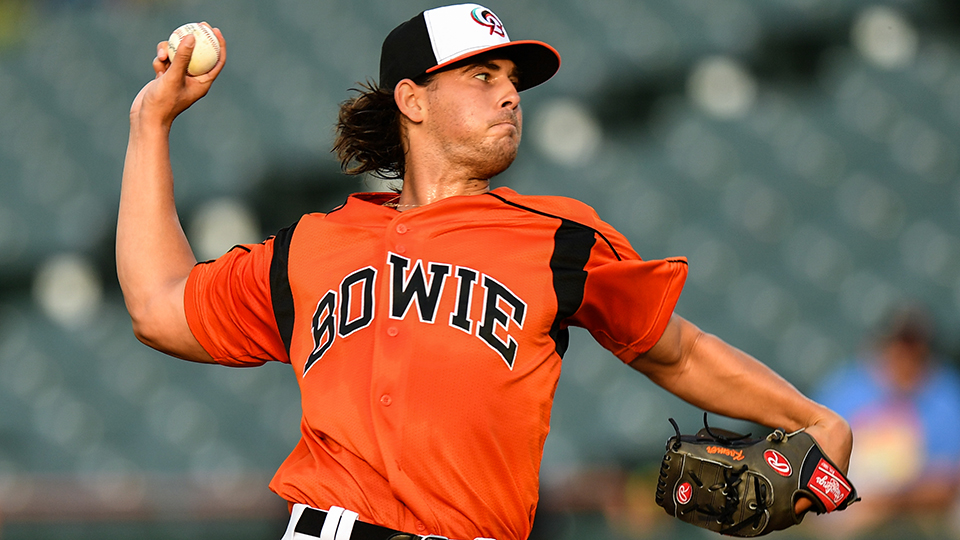 Dean Kremer did not allow a run in his first two starts of the season with Class A Advanced Frederick. (Terrance Williams/MiLB.com)

Sidelined with a left oblique strain in Spring Training that cost him the first month of the season, Dean Kremer said watching his fellow pitchers ramp up for the season "was like a puppy dog watching through the window."

On Tuesday, he was an alpha dog.

The ninth-ranked Orioles propsect struck out eight and gave up four hits and a walk over seven innings in his longest start of the season as Double-A Bowie blanked New Hampshire, 6-0, at Prince George's Stadium.

Pitching into the seventh for the first time this year, the right-hander allowed a leadoff single to Alberto Mineo. He rebounded by fanning the next three batters to complete his longest start since July 5 for Double-A Tulsa, when he was with the Dodgers' organization.

"It gives me some confidence," he said. "Just trying to build after every outing and trying to get a little bit better after each one."

Kremer (1-3) allowed a hit and a walk over the first four frames against the Fisher Cats. After the 23-year-old retired the first two batters in the fifth, he yielded back-to-back singles to Christian Williams and Andres Sotillo before getting Chad Spanberger to ground to first base.

"I kept the pitch count down at the beginning," Kremer said. "The defense did a great job behind me. Overall, pretty solid game all-around from the whole team."

The right-hander set down the side in order in the sixth before putting the exclamation point on his outing the following frame.

"I knew that I was a little bit higher in the pitch count after going that far," he said. "So I figured that would be it after that. Got to make the most of it, right?"

Kremer threw 61 of 98 pitches for strikes and six of his outs came in the air, compared to four on the ground.

But nearly four months ago, the timing of his injury -- a week before pitchers and catchers reported to Orioles camp -- was less than ideal.

"I did a pretty good number on it, so it set me back quite a ways," the UNLV product said.

Kremer had to allow the inflammation to dissipate before regaining strength, meaning he couldn't begin throwing until toward the end of Spring Training. He believes the injury came about because he did "too much too fast" in anticipation of camp.

Oblique injuries are difficult rehabs for baseball players, especially hitters. But the time off was especially frustrating for Kremer because his arm felt great. He didn't pick up a baseball for more than four weeks.

"You can't help any team in any organization sitting in the tub," the Stockton, California, native said. "It wasn't fun at all."

On May 9, Kremer debuted for Class A Advanced Frederick, where he pitched 9 2/3 scoreless innings in two starts. The Orioles promoted him to the Baysox and he allowed 12 earned runs in his first three starts.

"It was good to get my feet wet again," the 2018 California League midseason All-Star said, "because jumping up to Double-A -- the numbers show, obviously -- is a much stronger league. Definitely getting my feet wet again before getting back into this league was nice."

The Dodgers selected him in the 14th round of the 2016 Draft and he spent the first two seasons of his professional career with the club. Kremer was included in the package Los Angeles sent to the Orioles for Manny Machado last July.

With his new organization, Kremer impressed immediately. The 6-foot-3, 180-pounder went 4-2 with a 2.58 ERA in eight starts for Bowie. He fanned 53 batters in 45 1/3 innings and posted a 1.21 WHIP. In his mind, success in the Eastern League revolves around a simple formula: throwing strikes.

"Just remember that even though they're better hitters, you just got to pound the strike zone with all four pitches," he said. "Otherwise, the result will never be good."

Kremer said he wasn't overly exposed to the reasoning employed by the former Orioles front office. But with Baltimore's hiring of general manager Mike Elias, he's been pleased with the emphasis on development and video to improve the entire pitch arsenal. For Kremer, that repertoire includes a plus fastball and curve, along with a slider and changeup.

"It's been a good transition, with the regime change as well," he said. "Everything is good. I got no complaints or anything. I like what they do and I like how focused they are on getting every player in the Minor Leagues to a big league level."

Orioles No. 17 prospect Dillon Tate retired all six batters he faced to finish off Bowie's fifth shutout of the season. No. 22 prospect Rylan Bannon plated a run with a double and walked for the Baysox, while second-ranked Yusniel Diaz contributed a sacrifice fly. Both Bannon and Diaz came to Baltimore with Kremer in the Machado swap.