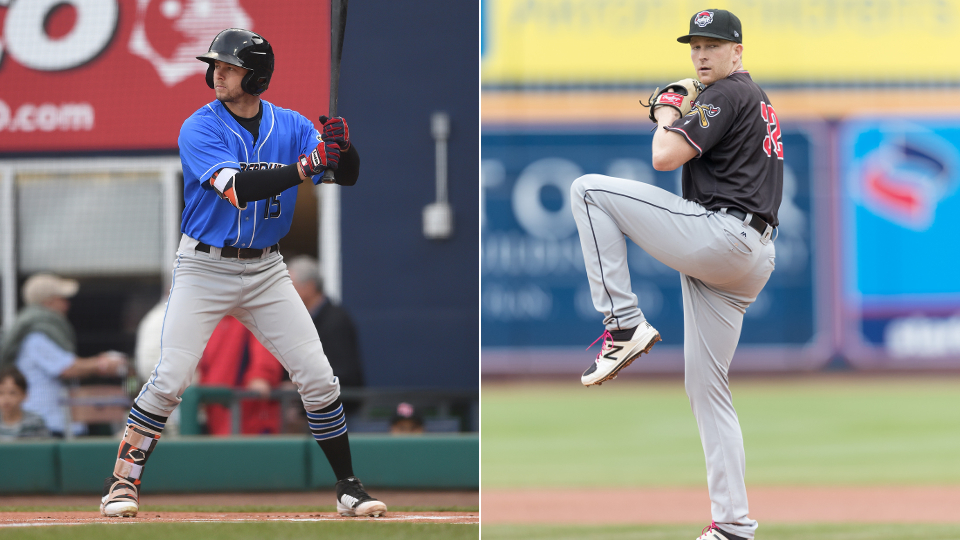 Akron RubberDucks outfielder Andrew Calica has been selected as the Eastern League Player of the Week for the period of June 4th-June 10th. The 24-year old hit .375 (9-for-24) with two doubles, two home runs, seven RBIs, four runs scored, one stolen base, four walks, and a .708 slugging percentage in six games last week. Calica, who is a native of La Jolla, California, had at least one hit in all six games he played in last week and also reached base multiple times in all six of those games. He also hit home runs in back to back games on June 6th and June 7th at New Hampshire. The 6'1", 190 lb. slugger led all Eastern League hitters in total bases (17) and OPS (1.224) last week and tied for the lead in extra-base hits (4). He also finished ranked among the weekly league leaders in home runs (2-tied 2nd), RBIs (7-tied 2nd), walks (4-tied 2nd), on-base percentage (.516-3rd), slugging percentage (.708-3rd), hits (9-tied 3rd), doubles (2-tied 5th), and batting average (.375-tied 8th). Andrew, who is hitting .322 with 13 doubles, three home runs, 34 runs scored, 26 RBIs, and 12 stolen bases in 48 games in his Double-A debut with the RubberDucks this season, was selected by the Cleveland Indians in the 11th round of the 2016 draft out of UC Santa Barbara.

Spencer Turnbull, a right-handed starting pitcher for the Erie SeaWolves, has been selected as the Eastern League Pitcher of the Week for the period of June 4th-June 10th. The 6'3", 215 lb. hurler started a pair of games for the SeaWolves last week and had a record of 1-0 with 14 strikeouts and a 2.13 ERA. Turnbull, who is a native of Demopolis, Alabama, made his first start of the week on Tuesday against the visiting Hartford Yard Goats and took a no-decision in Erie's 5-4, 10-inning victory. He gave up three runs on three hits while striking out three batters and walking six over 3.2 innings. Turnbull bounced back from that start by tossing a complete game in Erie's 6-0 win over the visiting Reading Fightin Phils on Sunday afternoon. He struck out a season-high 11 batters while giving up just four hits while throwing his first career shutout. The 25-year old threw the only shutout in the Eastern League last week and he tied for the league lead in strikeouts (14), complete games (1), and innings pitched (12.2). He also ranked among the weekly leaders in wins (1-tied 2nd) and batting average against (.163-10th). Spencer, who also won this award earlier this season for the period of May 7th-13th, was selected by the Detroit Tigers in the second round of the 2014 draft out of the University of Alabama.

Spencer Turnbull's Pitching Line for the period of June 4-June 10, 2018