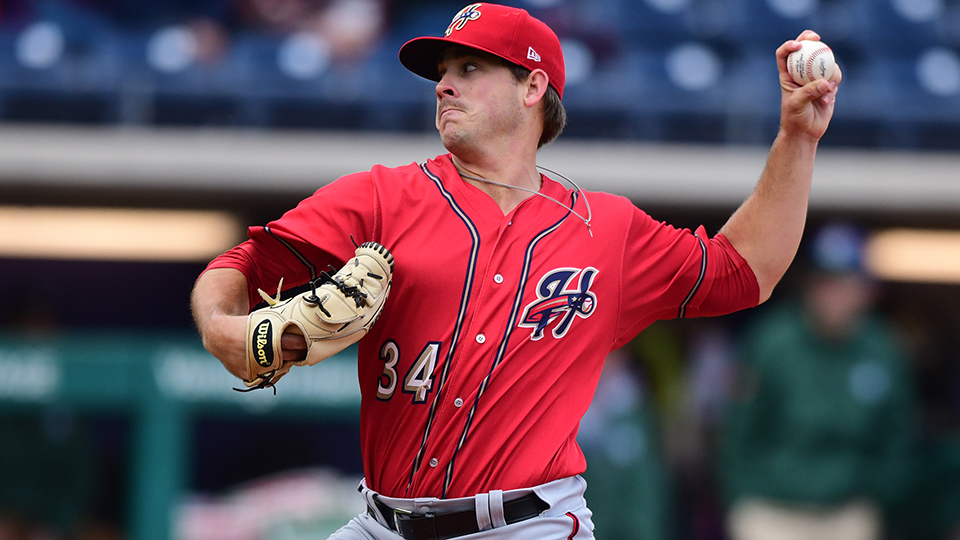 Ben Braymer is 4-4 with a 2.51 ERA over 13 starts in his first taste of Double-A with the Senators. (Kevin Pataky/MiLB.com)

Having pitched as a swingman for much of his career, Harrisburg's Ben Braymer is finding even more success this year thanks to his defined role as a starter and a tweak to one of his offerings.

An 18th-round selection out of Auburn in 2016, the left-hander has already helped the Senators clinch a postseason bid while also earning an All-Star nod in the process.

"It's been refreshing to have a set, defined role the entirety of this season so far. That's been nice," said the Nationals' No. 23 prospect. "I'm feeling great. We have a great group of guys, and we've experienced a lot of success as a team in the first half of the season. I think our group has done a great job of pulling together and rooting for each other. The results have showed."

Crediting Class A Advanced Potomac pitching coach Sam Narron with helping him fine-tune his routine and preparation a year ago, Braymer also has been aided in reuniting with Harrisburg pitching coach Michael Tejera, whom he learned under when he first broke in with the GCL Nats.

It's easy to see that added comfort in the numbers, which have gotten increasingly better as the season has progressed, with a 3.68 ERA in April giving way to a 2.04 ERA for the month of May and a 2.08 over his first three June starts.

"As far as the success that I've been fortunate to have, I think my relationship with our catchers Tres [Barrera] and Spencer [Kieboom] has been tremendous for me," Braymer said. "They've helped me grow and compete throughout the first half. I just really trust those guys and their preparation."

Then there is the continued comfort in his off-speed offering, which he made an adjustment to while playing in the Arizona Fall League last year.

"Whenever I moved to the rotation last year, I started to work on my changeup more," Braymer said. "At that point, I was throwing a two-seam changeup. Last season in the Fall League, I changed to a four-seam grip. That took a while to get used to."

But the more he's thrown the pitch, the more it becomes a legitimate weapon in an arsenal that includes a four-seam fastball that sits in the low-to-mid 90s and a 12-to-6 curveball. He already has enough confidence in the pitch that when his other offerings aren't on point, he will throw it in most any situation.

"I think it definitely plays up a little better than the two-seam grip did, because it looks the same [as the fastball] out of the hand," he said. "And it will drop or fade a little bit. The more important thing is that it has the same spin that the four-seam fastball has, and that's the key for me with that pitch."

As the league enters its second half, Braymer knows it will also be important to conserve his body down the stretch.

He threw a career-high 114 2/3 innings between the rotation and 'pen a year ago, and with 79 innings under his belt this season -- exclusively as a starter -- he should be poised to shoot past that number.

"I really don't set any goals for myself. My approach in this game is to take the talent I have and try to maximize it every day," Braymer said. "As far as taking care of my body, for me it's a matter of taking conditioning, weights seriously and staying on top of stretching."

The real one: Bowie's Mason McCoy has finally tallied into enough eligible at-bats to give the league a chance at a .300+ batting champ this season. Hitting .333 in 43 games since being promoted from Frederick in May, the Orioles' No. 30 prospect continues to be a model of consistency. In June, the recently named All-Star has hit safely in 18 of 21 games with 10 multi-hit performances. Between Frederick and Bowie this year the shortstop is hitting .351 with 106 total hits.

Scratch that: Since suffering back-to-back four-run outings at the beginning of May, Portland reliever Durbin Feltman has been a rock at the back end of games for the Sea Dogs. Since then, the No. 11 Red Sox prospect has gone 2-0 with two saves, a 1.40 ERA and 17 strikeouts in 14 appearances. The right-handed TCU product has a 4.45 ERA in 23 appearances this season, but minus those two blemishes he has a 2.05 ERA over 26 1/3 innings.

After the rain: Trenton's Nick Nelson looks to be back on track after returning from a sore shoulder that sidelined him for nearly two months. Though in his return to the Thunder rotation the No. 11 Yankees prospect did hit a bit of a bump, allowing three runs on five hits over 4 1/3 frames, he has rebounded nicely. In his last two efforts, Nelson is 1-0 with a 1.74 ERA and 13 strikeouts over 10 1/3 innings, allowing just three walks and five hits. Overall, the right-hander is 2-1 with a 2.66 ERA in six starts, one of which was a 3 2/3 inning rehab effort in Tampa.