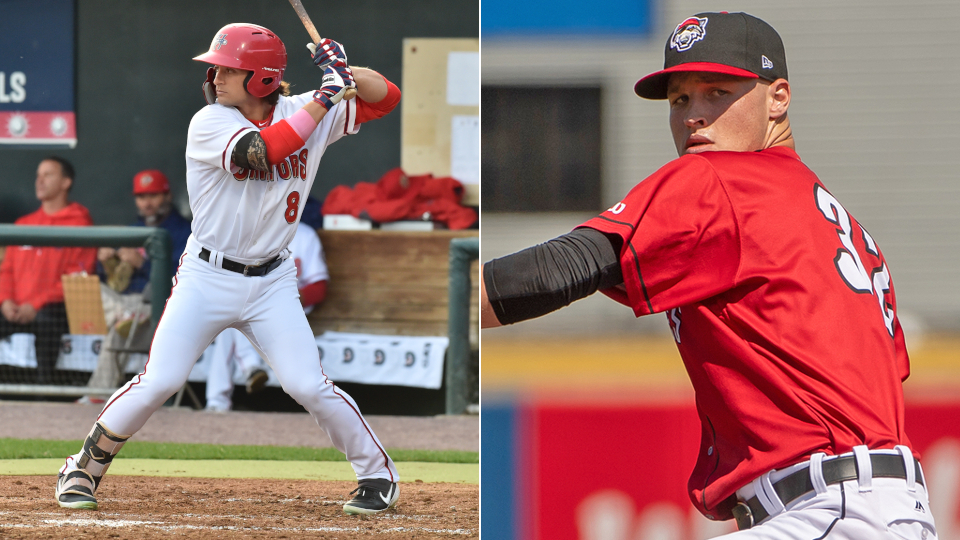 Harrisburg Senators outfielder Rhett Wiseman has been selected as the Eastern League Player of the Week for the period of April 4th-April 14th. The 24-year old is hitting .424 (14-for-33) with three doubles, six home runs, 13 RBIs, seven runs scored, five walks, one stolen base, and a 1.061 slugging percentage in 10 games for the Senators this season. Wiseman, who is a native of Boston, Massachusetts, has at least one hit in nine of the games he has played this season and has multiple hits in four of those games, including going 2-for-3 with a pair of solo home runs in a 3-2 win over Hartford on April 8th. The 6'0", 200 lb. slugger currently leads the league in home runs (6), extra-base hits (9), total bases (35), slugging percentage (1.061), and OPS (1.561). He is also ranked among the league leaders in batting average (.424-2nd), RBIs (13-2nd), on-base percentage (.500-tied 2nd), hits (14-tied 2nd), runs scored (7-tied 4th), and doubles (3-tied 8th). Rhett, who was a Carolina League All-Star with the Potomac Nationals last season, was selected by the Washington Nationals in the third round of the 2015 draft after hitting .317 with 15 home runs, 49 RBIs, and 70 runs scored in 71 games during his junior season at Vanderbilt University.

Matt Manning, a right-handed starting pitcher for the Erie SeaWolves, has been selected as the Eastern League Pitcher of the Week for the period of April 4th-April 14th. The 6'6", 215 lb. hurler has started two games for the SeaWolves this season and has a record of 2-0 with 15 strikeouts and a 0.75 ERA. Manning, who is a native of Elk Grove, California, was the Opening Day starter for the SeaWolves and gave up one run over five innings of work to earn the win in Erie's 11-1 victory over the visiting Trenton Thunder. He struck out five batters and walked three while giving up just one hit. Matt made his second appearance of the week on April 10th against the visiting Altoona Curve and fired seven shutout inning to earn the win in Erie's 5-1 victory. Manning tied his career-high with 10 strikeouts and did not allow a walk while surrendering just one hit. The 21-year old currently leads all Eastern League pitchers in WHIP (0.42) and batting average against (.054) and is tied for the league lead in wins (2). He is also ranked among the league leaders in strikeouts (15-tied 2nd), innings pitched (12.0-tied 2nd), and ERA (0.75-7th). Matt, who is rated by MLB.com as the second best prospect in the Detroit organization, was selected by the Detroit Tigers with the ninth overall pick in the first round of the 2016 draft out of Sheldon High School in California.