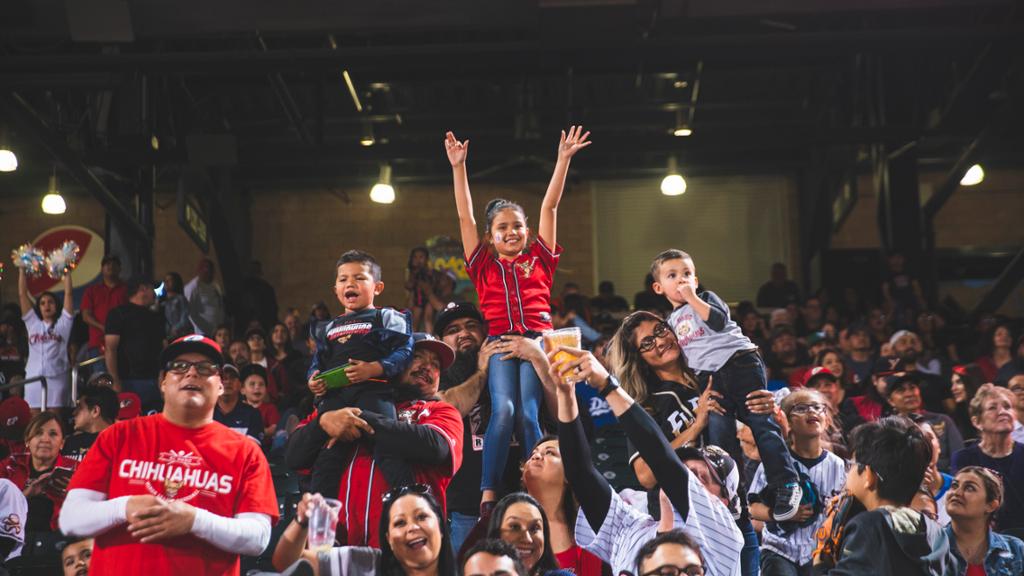 El Paso - November 13, 2019 - Ballpark Digest announced today that the El Paso Chihuahuas are the recipient of the Continued Excellence Award given annually to a Minor League Baseball organization that has continued to be a standard of excellence in baseball, create an atmosphere of family fun entertainment and exemplify great community partnership.

"It is an honor to be recognized by Kevin Reichard, Ballpark Digest and their entire staff with the award," said MountainStar Sports Group Sr. Vice President and General Manager Brad Taylor. "They have their finger on the pulse of the Minor League Baseball community and to have them recognize our work is very gratifying for our ownership, front office and gameday staff."

"With the Continued Excellence Award, we look for those teams that stand out year after year, continually bringing fans the best experience possible," said Ballpark Digest Publisher Kevin Reichard. "The Chihuahuas have been a leader in the industry since the team was founded, and the great successes of the 2019 season were built on the foundations of that continued excellence."

The Chihuahuas are coming off one of the most successful seasons yet having eclipsed the 3-million fan mark, surpassed 500,000 guests through the gates for the sixth consecutive season, and hosted two Minor League Baseball (MiLB) premier events - the RMHC Triple-A All-Star Game and Jarritos Home Run Derby and the MiLB Innovators Summit.

These achievements are only a small part of what MountainStar Sports Group (MSSG) - who own the Chihuahuas - had in mind when they purchased the team in 2012. With four local owners, Woody Hunt, Josh Hunt, Paul Foster and Alejandra de la Vega Foster, and led by President Alan Ledford and Taylor, MSSG is quickly seeing their mission come to fruition: to improve the quality of life and foster economic growth in El Paso, Juarez and Southern New Mexico region.

Since Opening Day in 2014, downtown El Pao has benefited and will continue to benefit from more than $350 million in completed and under development private investment, with public investment in current and future projects underway in an effort to create a more vibrant downtown.

MSSG takes significant pride in ensuring that Southwest University Park is always a first-class facility recognized as one of the best venues in the minor leagues. For this reason, MountainStar sports Group has invested more than $19 million over six years (including $3.25 in 2019) into the City-owned property to continue to innovate, design and build new, exciting attractions.

Under the leadership of MSSG, the Chihuahuas aim to provide the highest quality and most memorable entertainment in a safe first class and family-oriented environment every day and every game. This speaks true having welcomed 3.3 million guests in just six seasons.

The Chihuahuas have been named to MiLB's list of Top 25 teams in licensed merchandise since its October 22, 2013 debut. Branding success has led the Chihuahuas to sell more merchandise than any other team since 2014. This success is also evident in the 260-thousand followers across Facebook, Twitter, Instagram and Snapchat, the largest social media following in all MiLB.

"On October 22, 2013, when we announced and became the Chihuahuas, we made a commitment to believe in our brand and to promote it urgently, passionately and excessively. For six years, fans nationwide have bought in as well."

But it's not all about a baseball and branding. The Chihuahuas are more than their successes. They are community driven and aim to make a difference in a community that has embraced them since their arrival.

In an effort to make the community better by participating in it, one of the core values of the Chihuahuas, the organization launched the Chihuahuas Volunteer Pack presented by Helen of Troy in 2015, an El Paso-wide volunteer force created to give back to the community. The Pack, made up of fans, players, coaches and front office staff, makes a positive impact in our community. Together, they contribute to more than 300 community service hours annually.

Chico, the Chihuahuas mascot, also contributes to the community outreach, making more than 500 community appearances each year. His education programs have become popular among area schools who request Chico for his Turn Up the Volume on Reading Program, Anti-Bullying Campaign, and Red Ribbon Week Rallies to name a few.

But perhaps the largest community impact has been the El Paso Chihuahuas Foundation. Created to help make an impact to families and children in the El Paso region, the foundation has helped local organizations raise more than $1.5 million through in-stadium fundraising, have provided $300,000 in monetary donations and $150,000 in in-kind donations.

"From the beginning," Taylor said, "our ballpark and our efforts were about more than baseball. We view this building as a community center and our platform as El Paso's team as opportunities to do good things for and with our region."

The success isn't just off the field and in the community, as the Chihuahuas have been the Padres' Triple-A affiliate since MountainStar Sports Group acquired the team in 2013 as the Tucson Padres, renewing the PDC through the end of the 2022 campaign, fostering development among the top prospects in MLB.

Since making the move to El Paso, 59 former Chihuahuas have made their Major League debut in Major League Baseball since playing for the Chihuahuas. The Chihuahuas have had five consecutive winning seasons and won four consecutive Southern Division titles from 2015-2018 en route to two conference championships and two consecutive appearances in the Pacific Coast League Championship Series including a PCL title in 2016. The team has garnered two PCL MVPs in Hunter Renfroe (2016) and most recently Ty France (2019) and three PCL Rookies of the Year (Alex Dickerson, 2015; Carlos Asuaje, 2016; France, 2019).

The Chihuahuas under MountainStar Sports Group have continually delivered unparalleled and memorable service to their guests and clients and will continue to provide quality family fun entertainment for years to come.

"As we enter our seventh season our aim is to provide as much fun, as much value and as many memories as we did in our first season," said Taylor. "We are always looking for ways to improve our product and the guest experience."

The Chihuahuas are currently taking deposits for NEW 2020 Season Seat Memberships! Six levels of memberships are available offering members unprecedented in-ballpark access during the season, new year-round membership benefits and exclusive VIP treatment to its members. For more information on NEW 2020 Season Seat Memberships, call or text an Account Executive at (915) 533-BASE!

Groups, Premium Hospitality Events, and single-game suites are also on sale and dates are filling up fast! For more information call (915) 533-BASE, email tickets@epchihuahuas.com, or visit EPChihuahuas.com.