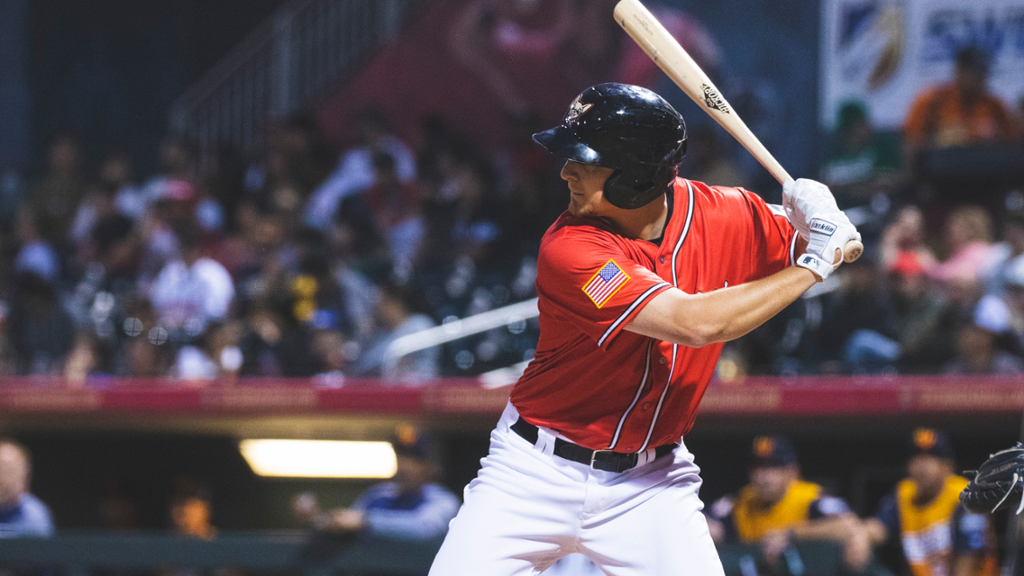 It truly was the stuff of dreams.

Alex Dickerson could drive down the street, take a right turn and get to his high school, to his playground, to his baseball field. A few years later, he could just keep going straight down that street and get to the clubhouse of the San Diego Padres.

Every little boy who grew up swinging a bat and tossing a ball and pounding a little fist into a big glove has those wide eyes, the eyes that see far into the future, that see a life in the Major Leagues, that see and believe dreams really do come true.

Sometimes, just sometimes, though, those dreams are deferred.

He was playing left field, hitting the ball and living the dream on the game's grandest stage.

Then, though, Dickerson ran headlong into an athlete's worst nightmare - injuries.

The 6-foot-3, 230-pound outfielder went into the 2017 season, ready to resume his role in left field, ready to continue pounding that little white ball. But he had a nagging back pain. Finally, he ended up on the operating table and his 2017 baseball season simply vanished.

Dickerson is a thoughtful soul, an intelligent man who embraces hard work, who knows that that hard work mixed with his beautiful left-handed hitting stroke is the recipe for success. So he worked hard to get ready for 2018.

Dickerson threw too much and in spring training unleashed a hard throw to home and snapped the ulnar collateral ligament in his throwing arm. Back surgery was followed by Tommy John surgery and 2018, like 2017, vanished for Dickerson.

One missed season is bad fortune for an athlete. Two consecutive missed seasons is enough to try Job's patience. It was as if two years of his baseball life floated away.

He paused recently, after taking some extra early afternoon swings in the batting cage and summed up his approach to all this misfortune, to his dream deferred.

"Both injuries affect you about the same," he said with a shrug and a smile. "They affect you for about three days, then you have the surgery and do what you need to do to rehab."

That 2016 season was so golden, filled with so much joy and excitement and a fierce foreshadowing of even better days to come.

The highlight of it all might have been that May night in Chicago, playing in one of the game's cathedrals, Wrigley Field. The Chicago Cubs led San Diego 8-3 in the eighth inning. Dickerson got the call from manager Andy Green to pinch hit and Dickerson will never forget what followed.

"We were down five and there were two out and the bases loaded," he said. "The count got to 0-2 and the crowd was on their feet, roaring. I hit the ball and then there was dead silence."

Dickerson used that graceful, beautiful left-handed stroke and lofted the ball into the Chicago evening fog, out into the right field bleachers. His first Major League home run was a grand slam.

Smiling, he said, "I'll always remember that feeling running around the bases."

As is tradition at Wrigley, the home run from a visiting player was rejected. The ball came bouncing back onto the field and Dickerson had a special souvenir for a lifetime.

"That's a big swing for anybody," Green told MLB.com that night. "He was smiling ear to ear. That was a fun moment."

There were also many special nights at Southwest University Park. Dickerson seemed almost invincible. He pieced together a whopping 29-game hitting streak - the first 13 games before being called up and ripping that memorable grand slam and then another 16 after being sent back down to El Paso.

Pausing, laughing, he said of the hitting streak, "When I got sent back to El Paso, I got off the plane and went straight to the ball park. I think I got there in the ninth. Rod (Barajas, then the manager) put me in to pinch hit. I had a battle with the pitcher and finally rolled one up the middle for a base hit that tied the game.

"Two weeks later, Rod forgot about the streak and put me in to pinch hit on a night off," Dickerson said. "I had another battle with the pitcher and ended up hitting a home run. Rod and I laughed about it later, about him forgetting I had a streak going."

But it was all good. They were just having fun, playing baseball and scoring runs … a lot of runs.

Dickerson grew up playing this game, honing that special stroke.

"I lived all but two years in San Diego," he said. "My dad was military, flew F-14 Tomcats. We lived in Tacoma for two years when I was around six so the first games I went to see were the Rainiers and the (Seattle) Mariners.

"But we moved back to San Diego and I always followed the Padres," he said. "I went to a lot of games. I remember seeing Trevor Hoffman and Tony Gwynn and Ken Caminiti. I got to go to the '98 World Series. Great teams."

Dickerson was a standout for Poway High in the San Diego suburb of Poway. He then opted to attend Indiana University and it turned out to be a good fit - for him and for the Hoosiers.

"I had a lot of calls but not that many offers out of high school," he said. "Indiana was good for me, to get away from home and learn to do things for myself. I loved the campus there and I loved the Midwest. I still have a place there; my getaway."

Dickerson was a freshman All-American and the Big Ten Freshman of the Year and then was the Big Ten Player of the Year as a sophomore. He was drafted by Pittsburgh in the third round in 2011 and signed. And the pivotal moment came in November 2013 when he was traded to his hometown team, the San Diego Padres.

He rose through the organization, excelled in El Paso, made a spot for himself in San Diego. And then the ugly, unwanted visitor that is injury stepped in.

And so now here he is in El Paso, working to get his stroke back, his timing back, his arm strength back.

"Alex Dickerson is a Major League. Hitter and we all know that," said Chihuahua manager Edwin Rodriguez. "It's a matter of him being able to perform at the highest level on an every day basis again.

Dickerson said he has a daily maintenance plan for both his back and his arm. He knows that hard work is important. But he has learned not to overwork his body in this long grind of a marathon that is a baseball season.

He has come from a little boy with big dreams in San Diego to an All-American at Indiana, to King Kong with a baseball bat in El Paso, to trotting around the bases in the cathedral that is Wrigley Field on the game's grandest stage.

He has tasted the dream. His journey was the stuff of dreams until 2017.

Now he chases that dream again, a dream deferred.

And a dream deferred quite often blossoms into the sweetest of all dreams.