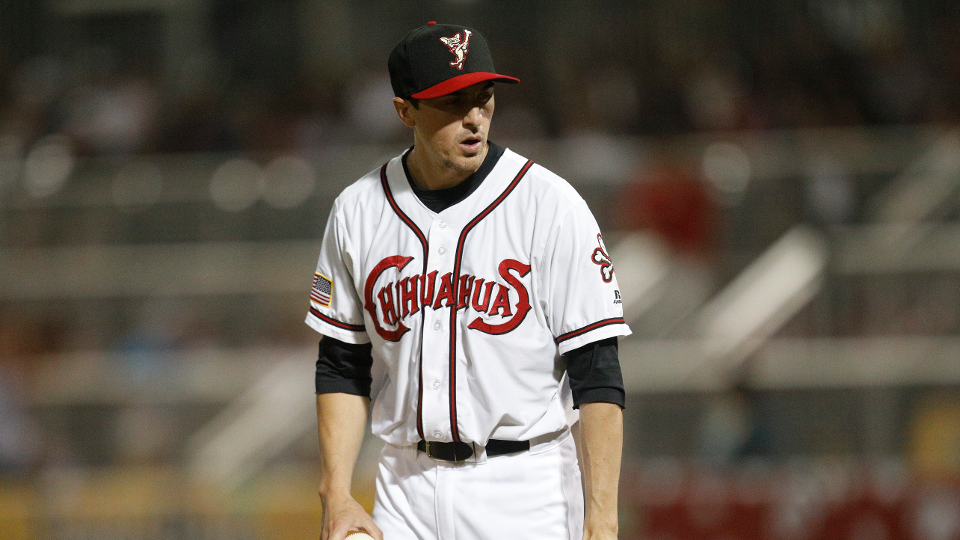 A few, a select few - if the angels land on their shoulder and align with all that hard work and sweat equity - get to experience a pinch-me moment.

For most, the pinch snaps you awake and you realize it is all just a dream.

Eric Yardley was very much awake two weeks ago in Seattle.

Yardley, the El Paso Chihuahua reliever and the man no one has ever really wanted, slipped into his San Diego Padre uniform and, in the eighth inning of a 2-0 game, trotted out to the mound in T-Mobile Park and pitched an inning against the Seattle Mariners.

But Eric Yardley, who is now just a phone call away from baseball's grandest stage, from the stuff of dreams, has defied all those odds for his entire career. And there he was, at the end of the exhibition season, pitching a key inning in a key moment of a Major League exhibition game. How did it go?

Smiling, gazing out onto Southwest University Park's finely groomed field, he said, "Strike out, fly out to left and pop foul out to first … a seven or eight pitch inning." Pinch me now.

Those who have seen Yardley pitch remember him forever. The 6-foot, 165-pounder has perfected the rather unorthodox submarine style, dropping down low with his delivery and making it very uncomfortable for right handed hitters and very unusual for left-handed hitters.

But he makes it work and he does the one thing that is essential for any pitcher. "He throws strikes,' Chihuahua skipper Edwin Rodriguez said. "He's a strike thrower. As long as he keeps himself in good physical condition, he can pitch anywhere at any level. He finds a way to get outs. Like I said, he's a strike thrower. You need a strike thrower and he shows up."

With a smile and a shrug, Yardley began to recount his improbable journey … a journey that came from nowhere to the wings of the game's greatest show.

"I grew up in Richland, Wash., and went to Richland High School," he said. "I pitched some in high school and then I played whatever position our pitcher normally played. For instance, if our left fielder pitched, I would play left field.

"I had no offers out of high school," he said. "I was going to go the junior college route. At the last minute, Seattle University added baseball again (after dropping it in the 1980s). They had 26 spots to fill and I was in the right place at the right time."

Yardley got to pitch a little as a freshman and sophomore. He evolved into a player who would pinch run, who would occasionally pinch hit.

And then came a pivotal moment in his baseball life.

"It was in 2012, the summer before my junior year," he said with a chuckle. "The coaches told me we had a good class coming in and I was not going to be able to compete. I had two choices. Drop down (with his delivery) or quit.

"They gave me my answer," he said, laughing. "It took me a couple of months to get a good vibe with the delivery. After a year, I could compete. I took off my senior year. We played some good teams - Oregon, Oregon State, Washington. I got noticed by some scouts by playing against them."

Still, his college career came and went and it looked like baseball was slowly slipping into the rear view mirror.

"I had talked to a few scouts but I was undrafted and I really didn't expect to get drafted," he said. "I really didn't know my options. I had applied for the Master's program in teaching there at Seattle."

Then someone mentioned the Pecos League, a low level independent league out here in Texas and New Mexico. It was something. It was baseball.

Laughing, he said, "I tell people it was bad baseball on bad high school fields and there was never a shortage of players. There are always guys who want to play a little longer and then say they played professional baseball.

"I was one of those guys," he said. "I thought I would play there and then go back to graduate school and go on to teaching."

A RIDE TO EL PASO

But Yardley continued to work at this and the angels continued to flutter about and he had caught the eye of a scout or two. That was his first, albeit strange, encounter with El Paso.

"A scout called me and told me they had an opening (with the Padres) in Phoenix if I could get to Phoenix," he said, shaking his head at the recollection. "We had just played in Alpine and we were going to Alamogordo and a coach drove me over to the airport in El Paso. I waited for my flight for about four hours and got to Phoenix and the rest is history."

Yardley continued to work at his craft, to pile hours upon hours of sweat equity in this unforgiving dream-chasing business. He reached Double A San Antonio for stints in 2014 and 2015 and has pitched and pitched well in Triple-A El Paso in 2016, 2017, 2018.

More importantly, Yardley has been to the Padres' Major League spring training camp each of the last two seasons. He lasted until the final two weeks in 2018 and he lasted until that final game this year.

Eric Yardley has touched the pinnacle of baseball and he knows he is just a phone call away from chasing down the ultimate dream, the dream of any little kid who ever swings a bat or throws a ball.

He is quite literally waiting. In the wings.

And he hopes one day, sooner than later, he will experience the ultimate pinch-me moment … a moment when he jogs out to the mound to pitch in a real life, regular season Major League game.

He is so close … ever so close.

For now, though he still has that one pinch-me moment from last week, a moment most people never get.

How was that moment? Was his heart racing out of control?

Smiling, breaking into a laugh, Yardley said "Surprisingly, I was all right. I was more like, all right, don't screw this up."

"I wanted to enjoy the moment," he said. "I wanted to take it all in. If this was my last time on a Major League mound, I wanted to remember it."

It was OK to pinch Eric Yardley at that moment. He was wide awake and this dream was very real. And he is waiting in the wings for the chance to step center stage one day soon.

"I'd like to think so," he said. "Now I have to go out, pitch well, win and show you are ready. The clubhouse in San Diego is completely different this year. It's let's go. You show up or you get out.

"We have to keep winning here in El Paso," he said. "You win here and you can win there."

Pausing, gazing out on the field again, he said, "I look forward to the opportunity. Hopefully, it comes sooner than later."

The angels seem to be fluttering nearby, so close one can almost feel their presence. All that hard work and sweat equity have given the man his chance.

Eric Yardley has one pinch me moment.

Could another - the ultimate pinch-me moment - be far away?

Bill Knight is a contributing writer for the El Paso Chihuahuas. He may be reached at bknight@epchihuahuas.com.