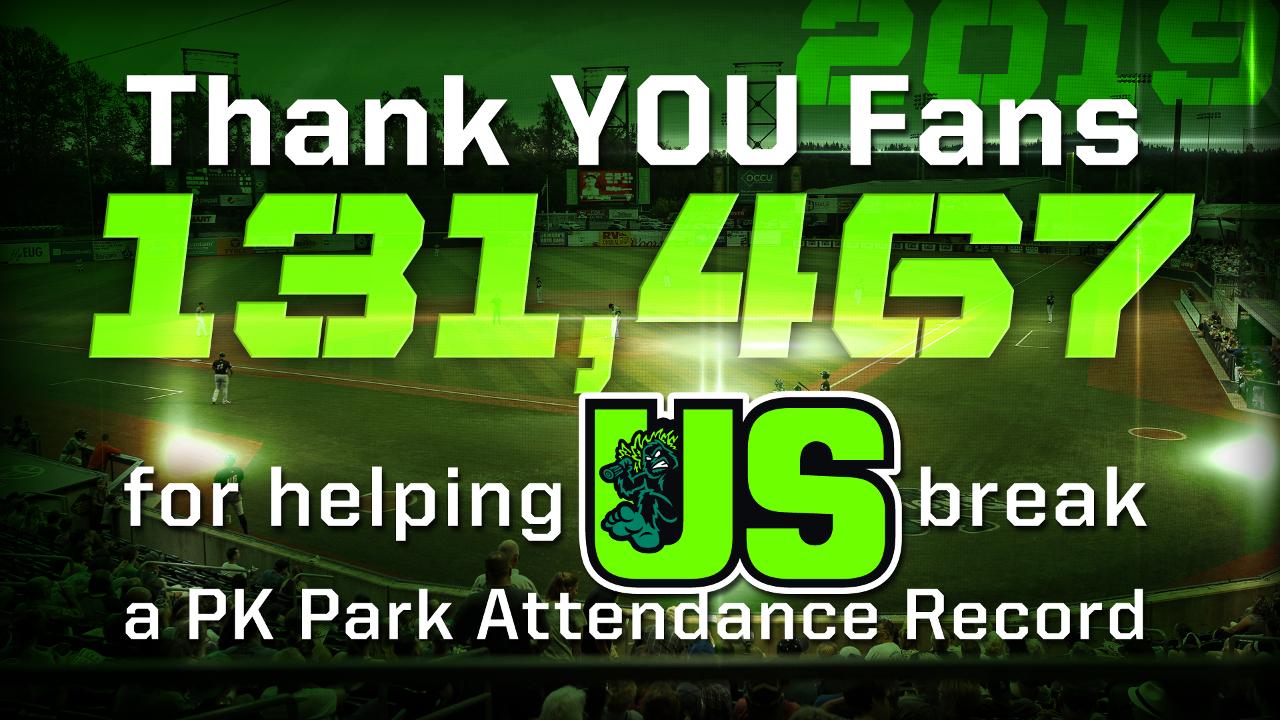 With another season of Emeralds baseball now officially in the rear-view mirror, we're taking a look back at some of the special moments and memories created during the 2019 season. Today, we'll take a look at another historic season for the Ems after a record number of fans passed through the PK Park gates once again.

The Emeralds organization entered 2019 fresh off one of the most memorable seasons in franchise history. After a total of 125,967 fans attended Ems games during the 2018 season, a new PK Park record, the Emeralds ended the season with one of the most improbable championship runs in modern sports memory, going worst-to-first with a walk-off balk in Game Three of the Northwest League Championship Series to claim the NWL title for the second time in three seasons.

As if that wasn't enough, the season was officially capped with more hardware as the Ems organization was honored with the Larry MacPhail Award as Minor League Baseball's top promotional team for 2018.

And so, the bar was certainly set high entering the 2019 season, but to no one's surprise, the Emeralds once again reached and exceeded expectations once more, smashing the PK Park attendance record for the fifth consecutive season.

A record number of fans turned out to PK Park in 2019 thanks in large part to the creative and unique giveaways, theme nights and promotions that the Emeralds organization cooks up. Nearly a third of the 2019 Emeralds home games featured some form of creative giveaway, as shown below:

In honor of last season's improbable worst-to-first championship run, the first 1,000 fans that entered through the home plate gate on Opening Night were gifted an incredibly realistic replica of the 2018 Eugene Emeralds NWL Championship ring.

Few combinations are better in life than Father's Day and baseball. And so, the Ems and McKenzie-Willamette Medical Center teamed up to hand out 1,000 wiffle ball sets. Naturally, our resident service dog in-training, Vegas, was a big fan of the giveaway, particularly the ball.

Not only were these sweet threads worn in the 1988 hit baseball classic, Bull Durham, but they were also gifted to the first 1,000 fans that passed through the home plate gates on June 21.

We've all heard of bobbleheads, but what about bobble-BUTTS?! The Emeralds offered a new spin on a time-old giveaway when they honored PK Park's notorious late-inning prankster, the Rally Squatch, with his very own bobblehead, errr, bobble-butt.

Few PK Park prospects have been more highly-touted in recent years than Eloy Jimenez, the reigning American League Player of the Week. Jimenez was part of a star-studded Ems outfield that marked the beginning of a new era in the Emerald Valley as 2015 was the first season of the Emeralds' current run as an affiliate of the Chicago Cubs.

In what is quickly becoming a yearly favorite giveaway, the Emeralds once again teamed up with Baseballism, a baseball-centric clothing organization founded by a handful of University of Oregon grads, to design a one-of-a-kind Emeralds hat that pays homage to Oregon, a.k.a. the Beaver State.

There's no crying in baseball! Ok, maybe there's a liiiiiittle crying in baseball, but there's also this great bobblehead giveaway designed to honor local resident Lois Youngen, a former player in the All-American Girls Professional Baseball Leauge (AAGPBL), as seen in the 1992 hit movie A League of Their Own.

Everything is awesome, including these Emeralds minifigs! The Emeralds gave away 500 of these specially-designed minifigures thanks to local partner Bricks & Minifigs.

Wakanda (and Eugene) forever! The Emeralds wrapped up the 2019 home schedule with Marvel Super Hero Night, a yearly favorite at PK Park. To honor the night, the Emeralds gave away 1,000 of the Black Panther bobbleheads pitcured above to the first 1,000 fans that entered through the home plate gates.

But beyond fun and quirky theme nights, the Ems also value the importance in using the organization's platform to support impactful groups, causes, and initiatives within and around the Eugene/Springfield community, as evidenced by this past season's PRIDE Night, Bike to the Ballpark / Climate Change Night, American Cancer Society's Relay for Life, First Responder Appreciation Night, Suicide Prevention Night, Military Appreciation Night, and the Boys & Girls Club's Field of Dreams.

The Eugene Emeralds organization offers a sincere, heartfelt thanks to all of the fans, players, staff members, sponsors and nonprofit organizations that together made 2019 another record-setting season.