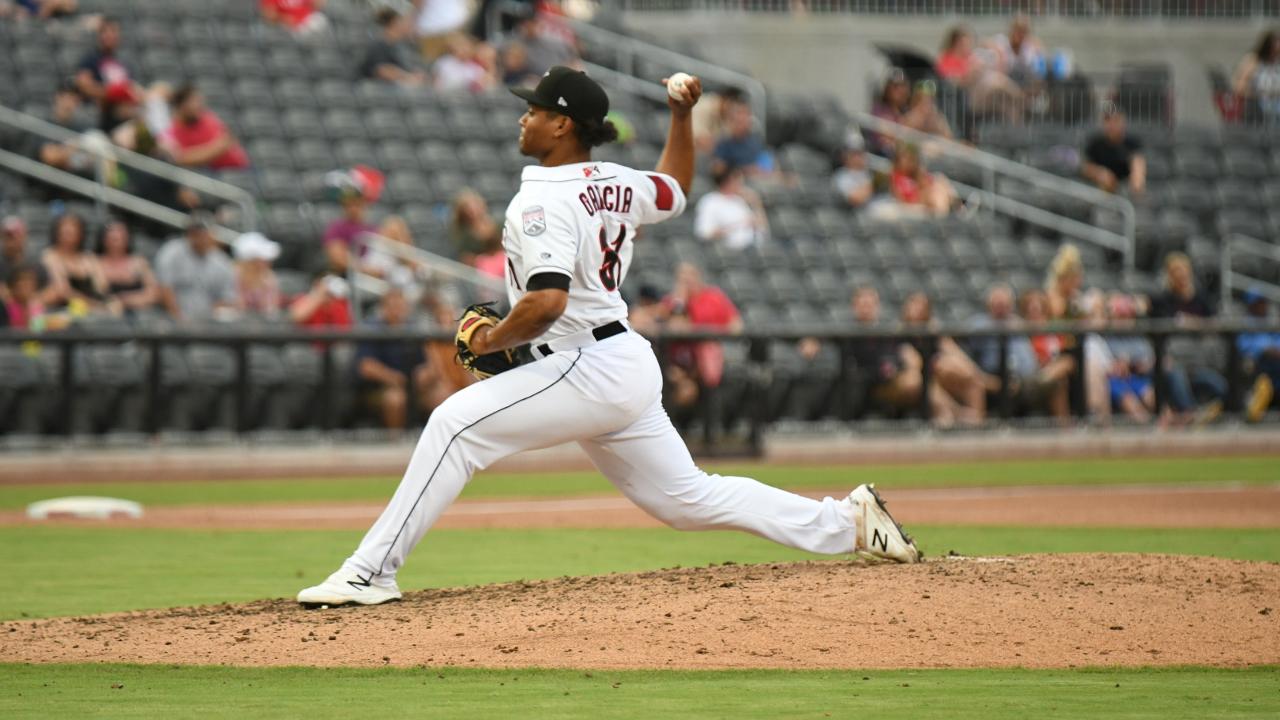 Luis Garcia pitched four innings and allowed just one run to finish out the game on the mound for the Fayetteville Woodpeckers but the Potomac Nationals had racked up seven runs in the opening five frames to cement a road victory. Ross Adolph went 2-4 in the Saturday evening matchup, but 17 straight Woodpecker batters were retired in between the outfielder's knocks. While the Fayetteville offense was quiet, the Nationals smacked 14 total hits and allowed the Fayetteville offense to reach safely just five times all night in the 8-1 win at Segra Stadium.

Potomac notched the first tally of the game right away in the top of the first against Woodpeckers starter JP France (3-6). Gage Canning drew a lead off walk to start the contest and then moved to second off the bat of a sacrifice bunt laid down by Cole Freeman. The run came home with an RBI single from Aldrem Corredor, making it a Carolina League best 66 RBIs on the season for Corredor and giving Potomac a quick 1-0 lead. The Woodpeckers offense went three up, three down against Nationals starter Kyle Johnston (9-8), who struck out Jacob Meyers and Chandler Taylor to end the frame. The top of the second went well for France who faced the minimum, but the top of the third saw two runs come through for the P-Nats. Omar Meregildo opened the inning by drawing a lead off base on balls and moving to second on a successful bunt from Osvaldo Abreu. France got the first out when Canning popped up Woodpecker's catcher Michael Papierski, but with two runners on Cole Freeman followed by slicing an RBI base hit to left field. Meregildo scored to make it 2-0 and Abreu moved into scoring position at second. Corredor sent home Abreu for his second RBI of the night, launching a line drive to center field to make it 3-0 Potomac heading into the bottom of third.

The Woodpeckers looked to launch a comeback against Kyle Johnston, starting with a leadoff double smacked by Enmanuel Valdez. Miguelangel Sierra flew out to right field but moved Valdez to third on ball to the outfield. The Woodpeckers finally got on the board when Scott Schreiber grounded into a 6-3 out that gave Valdez enough time to score. Now within a pair of runs, Jeremy Pena roped a single to put the tying run at the plate, but Johnston settled in and forced out Jacob Meyers to end the inning. With the Potomac up just 3-1 the Nationals offense got hot to stretch the lead in the top of the fourth. Gilbert Lara immediately crushed a solo shot off of JP France over the wall in the left center field to make it 4-1, good for Lara's first homer in a Nats uniform. Alex Dunlap followed by drawing a base on balls, followed by Meregildo reaching on a single. With two runners on, Osvaldo Abreu flared a single to right field that scored Dunlap and made it 5-1 Potomac. Corey Julks bobbled the ball on the base-hit allowing Meregildo and Abreu to move to third and second respectively on the E9. With still no outs, Gage Canning singled to add another tally and make it 6-1 on the center fielder's 25th RBI of the season. With runners at the corners and still nobody away the Woodpeckers made a pitching change, leaning on Humberto Castellanos to put all three away in the inning,

The Woodpeckers offense still struggled to hit Johnston who was having himself a night on the mound, meanwhile another run came through for Potomac in the top of the fifth. Jack Sundberg became the fourth Nationals leadoff batter to reach, by chopping an infield single to take first right away. Castellanos retired the next two batters he faced, Meregildo brought Sundberg home with his second single of the night to make it 7-1 Nationals.

Johnston pitched a gem at Segra Stadium, lasting seven full innings and giving up just three hits. The Potomac starter gave up just three hits, striking out six, and allowed just five baserunners through his entire outing. On the other end the Woodpeckers made another pitching change, sending out Luis Garcia for the top of the sixth. The hurler pitched a three up, three down top of the sixth inning on the back end of the scheduled tandem. In fact, Garcia allowed just one run in four innings pitched, giving up three hits and striking out five. Another run did come through for the Nationals with Garcia on the mound in the top of the ninth inning. Cole Freeman laced a leadoff single, then moved to third on another single from Corredor, eventually coming home when Telmito Agustin hit into a double play. The tally made it 8-1 Potomac, which would stand through the rest of the game as Frankie Bartow pitched a scoreless 8th and 9th to solidify a seven run win for the Nationals over the Woodpeckers.