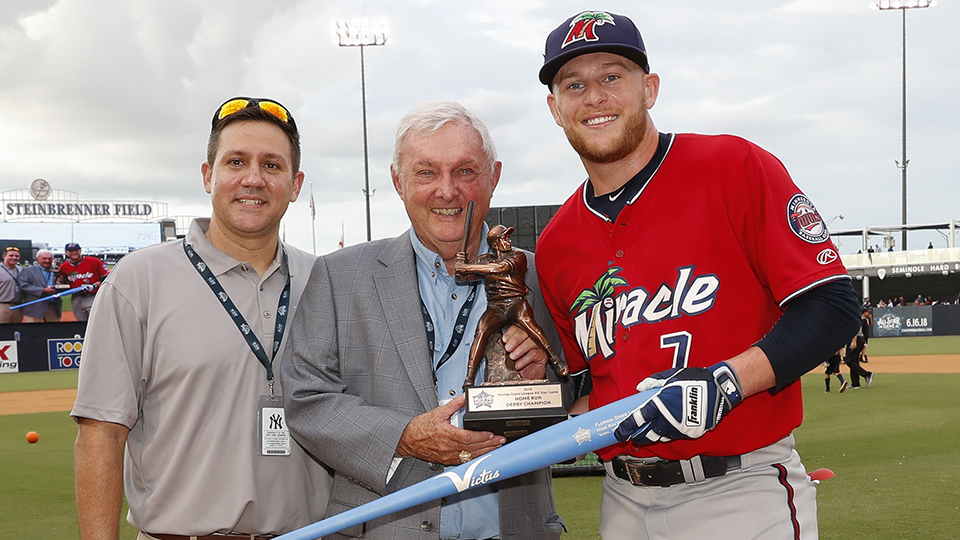 Travis Blankenhorn had to rally.

The Twins' 14th-ranked prospect needed eight homers in just a minute and a half to advance to the championship round of the Home Run Derby at the Florida State League All-Star Game.

"We talked it over. My teammate [Jaylin Davis] suggested my coach slow it down a little," Blankenhorn said. "I was getting a little tired."

After the 30-second timeout, Blankenhorn went on a rampage. Over the next minute, he launched 10 deep drives into the night on the way to taking the crown on a warm and humid Friday evening at George M. Steinbrenner Field.

Blankenhorn totaled 31 homers, topping Reds No. 3 prospect Taylor Trammell of the the Daytona Tortugas in the championship round. Trammell finished with 29 long balls, including 11 in the final round.

Blankenhorn has hit 32 jacks since the Twins selected him in the third round of the 2015 Draft. He'd never had the opportunity to take part in a home run derby prior to Friday.

"I didn't know what to expect," Pennsylvania native said. "I was just trying not to throw a goose egg up there in the first round."

With the short porch at just 314 feet down the right field line, the left-handed hitter worked his pull side.

"Once I got into a groove, I felt pretty good. Tried to use the ballpark to my advantage, being a lefty," he said.

After besting Trammell by one in the finals, Blankenhorn celebrated with a large group of friends and family on the field while sporting the championship trophy.

Blankenhorn's All-Star weekend comes at the height of a midseason surge as the Fort Myers Miracle outfielder is batting .333 in 14 games in June to raise his average to .270. He's one of six members of the Miracle on the South Division squad in Saturday night's All-Star Game, joining pitchers Andrew Vasquez and Tyler Wells, catcher Taylor Grzelakowski, infielder Lewin Diaz and Davis.

Blankenhorn also got an assist from Fort Myers hitting coach Steve Singleton, who served as batting practice pitcher to both Blankenhorn and Davis.

"It was good that he could come up here and do this for me and Jaylin because he didn't have to do that by any means," Blankenhorn said. "It was nice just having someone we know, a familiar arm."

Davis hit three homers in round one, while the Tampa Tarpons' Brandon Wagner belted four. Mitch Nay of the Tortugas and Andy Young of the Palm Beach Cardinals advanced as far as the second round, finishing with nine and 14 homers respectively, before the final showdown between Blankenhorn and Trammell.

The evening's events also featured Mascot Mania, with contests held between rounds and intermittently throughout the derby. The competition included races, a mascot home run derby, T-shirt toss and mascot dodgeball, with the Daytona Tortugas' Shelldon emerging as the Mascot Mania champion.