Miracle morph into the Mighty Mussels 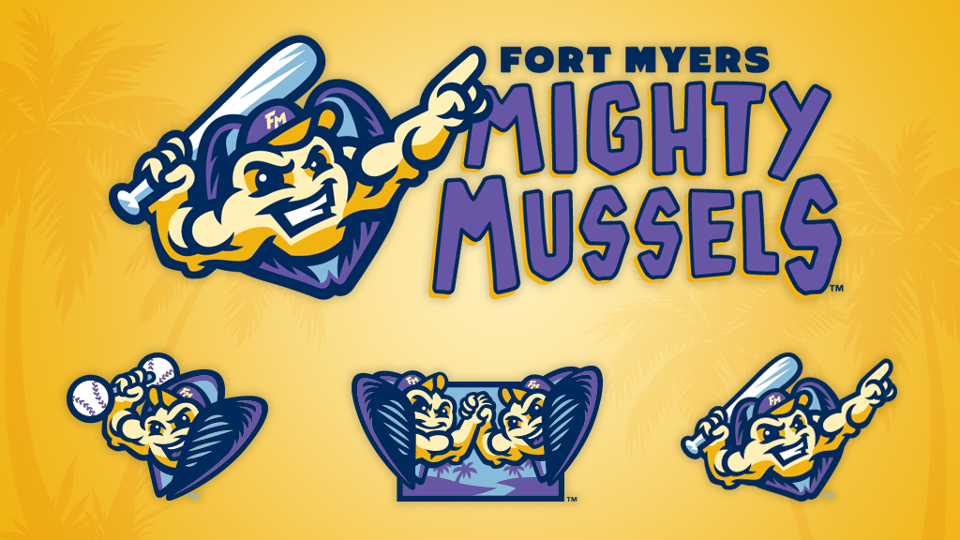 After 28 seasons as the Miracle, Fort Myers' Florida State League team is coming out of its shell. The Mighty Mussels have washed ashore.

The Fort Myers Mighty Mussels name was unveiled to the public during a ballpark news conference Tuesday morning, alongside a logo set featuring the titular brawny bivalves in a variety of athletic poses. The logos were created by Brandiose, the San Diego-based design firm that regularly works with Minor League Baseball teams. The Mighty Mussels are the latest in a line of Brandiose logos introduced over the past month, following the Missoula PaddleHeads and Worcester Red Sox.

The Mighty Mussels are the Class A Advanced affiliate of the Minnesota Twins, a relationship extending back to the team's inaugural 1992 season in Fort Myers. Their home of Hammond Stadium also serves as Minnesota's Spring Training facility. The just-retired Miracle moniker dates back to 1989, when the franchise was established as the Miami Miracle. The Mighty Mussels are the latest Florida State League club to reference an aquatic entity in its name, joining the likes of the Tampa Tarpons, Charlotte Stone Crabs, Daytona Tortugas, Jupiter Hammerheads and Clearwater Threshers.

Fort Myers' new identity comes amid of period of larger change for the franchise, which was purchased prior to the 2019 season by Andrew Kaufman of Jacksonville-based Zawyer Sports. Kaufman also owns the Jacksonville Icemen, a hockey franchise competing in the ECHL (an orphan initialism that previously stood for East Coast Hockey League).

Kaufman said the rebrand was motivated by a "disconnect" between the Miracle name -- which originated outside of Fort Myers -- and the local community. Brainstorming sessions around the new name included two prerequisites: It must be regionally specific while also reflecting a healthy, active lifestyle. Mighty Mussels is, of course, a double entendre since the mussel in question has plenty of muscles.

"When you walk along the beach and spot a mussel shell, looking at its colors as the light reflects off the black shell, there's purple, light blue and orange," said Kaufman. "Well, those would be cool colors from a character development standpoint. Think Disney, but edgy."

"Does it have to look like what a mussel actually looks like? Because if you're too literal, people will look at it and go, 'What is that?'" he said. "You have to think of both the reality as well as the fiction that is perpetuated. Mickey Mouse might not look too much like a mouse, but people see a mouse. It was the same kind of thing here."

Tuesday's news conference also included the unveiling of a Mighty Mussels comic book, produced in a limited edition of 1,000. The comic details the origin story of the Mighty Mussel, a baby mussel who, after being separated from his family by a rogue wave, stumbles upon a glowing bat. The bat transforms him into a benevolent bivalve behemoth, granting him the strength he needs to rescue his family from the clutches of a cadre of evil Gym Rats. Klein said this super-heroic origin inspired the team's purple "Mussels" font, which he describes as "comic book, SpongeBob, aquatic and tropical all mixed together."

"The comic book is a big deal for character development," said Kaufman, who noted there will be a new issue produced every season. "We'll hand those out [at the news conference] and still have a couple hundred left for sale. It's an ongoing saga -- I can see there being 'The Revenge of the Gym Rats.'" The Mighty Mussels primary logo features the musclebound mussel pointing skyward in what Kaufman describes as a "Let's go!" gesture. It is complemented by a pair of alternate logos. One features the mussel pumping a baseball-weighted dumbbell, while the other features two mussels enthusiastically greeting one another.

"That's an homage to the Minnesota Twins logo," said Klein. "But it became, 'How do we take the craziest fitness icon and merge it with the Twins handshake?' I think the appropriate term for that logo would be 'a Schwarzenegger-esque riff on the Twins handshake.'"

Now that the Mighty Mussels and their origin story have been unveiled to the world, Kaufman and his staff will devise ways to incorporate the team's branding into the gameday experience.

"There will be a lot of things that have that muscle theme," said Kaufman. "Like a flex cam, muscle tees in the gift shop, a bar called 'The Bar Bell' and maybe a Gym Rat Race. And each year, there are more and more characters who may appear."

The Fort Myers Mighty Mussels will make their debut on April 9, playing at home against the St. Lucie Mets.