Frogs use four-run third to leap out to big lead, Langhorne has another big night 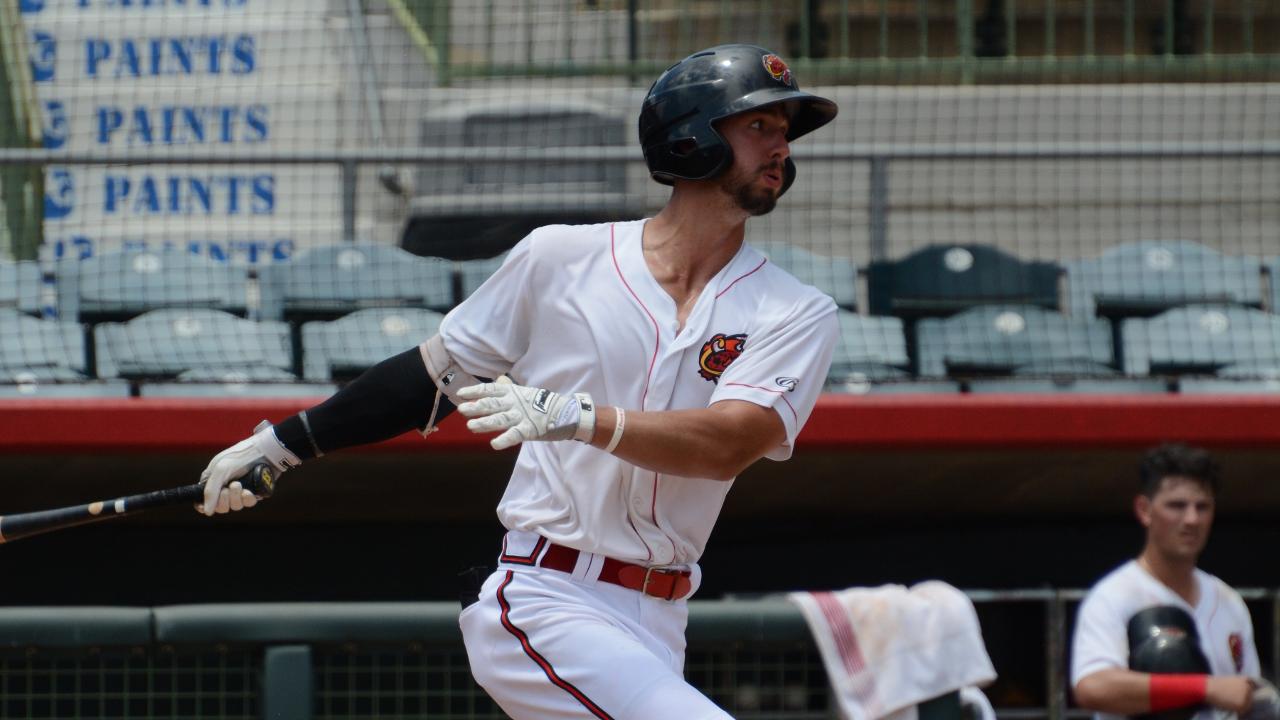 Brett Langhorne is off to a 4-7 start in the Dunedin series and has climbed aboard six occasions over the first two games, including reaching base four times in the Fire Frogs loss to the Blue Jays on Saturday (Alan Green)

KISSIMMEE, FLA.: The Fire Frogs held a 7-1 edge through the first four frames, but the Dunedin Blue Jays rallied to score eight runs over the final five innings, surpassing Florida, 9-8, to even the series on Saturday night at Osceola County Stadium.

Garrison Schwartz coaxed a one-out walk to climb aboard in the bottom half of the frame. Two batters later, Langhorne's RBI two-bagger to the gap in right-center sent Schwartz scampering around the bases for a 3-1 Fire Frogs edge.

Langhorne picked up his second straight multi-hit effort and 14th of the season. He was 2-3 with a double, an RBI, a run, and he was issued two free passes.

Florida seemingly broke the game open with a four-run third as six consecutive hitters reached with one down. Rusber Estrada smacked a two-run single. Schwartz and Shean Michel followed with RBI knocks of their own to balloon the lead to 7-1.

Estrada continued his tear at the plate by going 1-4 with 2 RBIs. He has driven in five runs and has hit safely in all four assignments since be reinstated from the Injured List on August 15.

Michel turned in his eighth multi-hit game of the year by slashing 2-4.

Johnston didn't make it out of the third, surrendering seven earned runs, four hits, and six walks over seven outs. RHP Mike Ellenbest gave up the RBI hits to Schwartz and Michel in the third, but otherwise performed very well by yielding just four hits and an unearned run across 3 and 2/3's stanzas.

The Blue Jays scored two runs in the fifth and the sixth to close to within 7-5. A passed ball from Rusber Estrada in the fifth with Reggie Pruitt at the plate brought in the first tally. Pruitt singled home Nick Podkul to round out that frame. An RBI single from Kacy Clemens in the sixth was followed up by a Samad Taylor sacrifice fly to force in the other tallies.

Florida was ahead 8-5 upon Wilson's removal from the game before the seventh inning began. The Fire Frogs scratched across a run on a Delgado double play ball in the bottom of the sixth.

A three-run eighth completed the comeback for the Blue Jays. Noda walked and Clemens singled off RHP Lukas Young ahead of another sacrifice fly from Taylor. With new pitcher RHP Brandon White in the game, pinch-hitter Chavez Young smoked a two-run double to the right-field corner, bringing Clemens and Podkul around for an 8-8 ballgame.

A double by Alejandro Kirk and two walks loaded the bases for Taylor, who drew another walk to force in the winning run; 9-8 Dunedin.

Young gave up two hits and three runs across five outs. White (3-5) allowed two hits, three walks, an intentional walk, and an earned run over the final 1 and 1/3's innings to take the loss.

RHP Emerson Jimenez (6-1) received his third win of the season against Florida, working around a hit and two walks over two frames. RHP Jackson Rees bounced back from Friday's loss with a 1-2-3 ninth to collect his sixth save.

Orimoloye and Clemens had the multi-hit efforts for Dunedin. Noda walked three times as part of a 1-2 day at the dish and scored three times. Taylor drove in three runs.

NEXT UP: The rubber match of the three-game series and the final Fire Frogs home game in Kissimmee will take place at noon on Sunday. RHP Odalvi Javier (0-2, 4.34) throws opposite LHP Nick Allgeyer (10-5, 4.09).

Sunday is Fan Appreciation Day at Osceola County Stadium with surprises for all throughout the contest. It is also the final Bark at the Park day. Draft beer is just $1 as our countdown to the final home game concludes.

GET YOUR TICKETS NOW: https://www.milb.com/florida/tickets/single-game-tickets