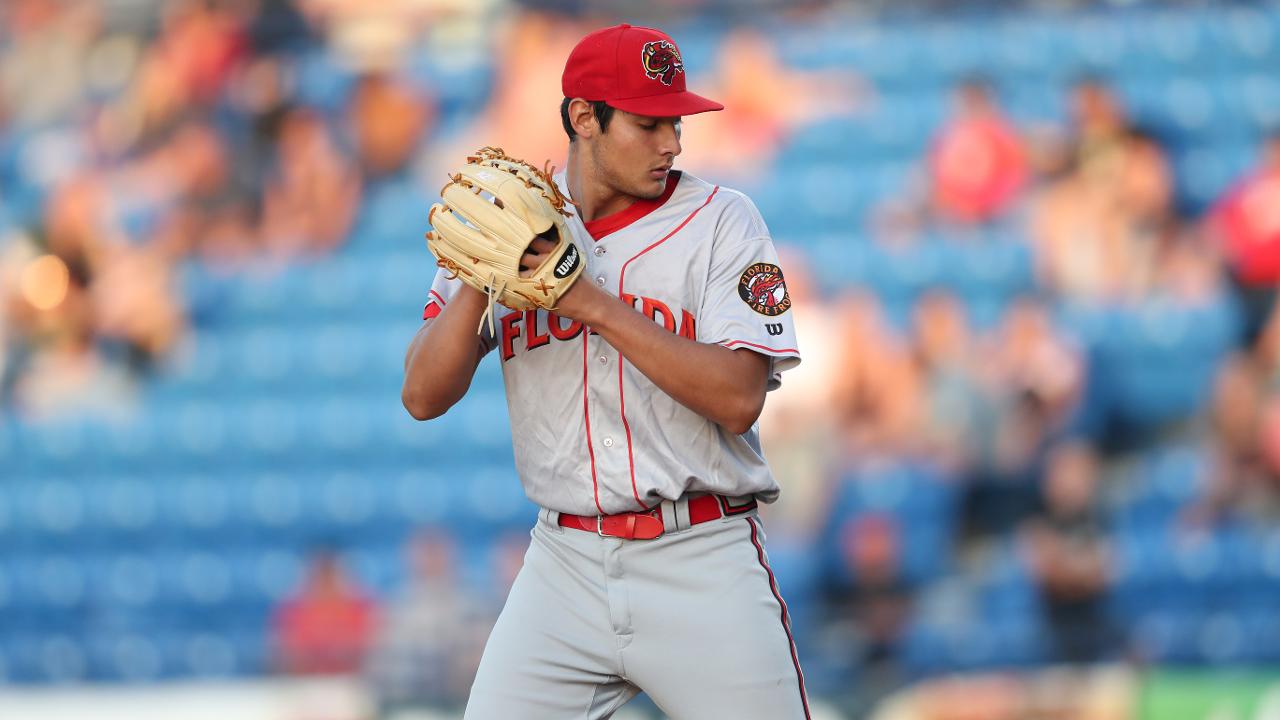 LAKELAND, FLA.: The Florida Fire Frogs used a sharp outing from RHP Freddy Tarnok to take game one of a double header, 3-1, from the Lakeland Flying Tigers before they countered with a walk-off 4-3 triumph in the night cap.

Game 1: Tarnok (2-5) kept the Flying Tigers off-balance through six innings of work. He minimized Lakeland's bats to just four hits and a run with three strikeouts. The only blemish on his report card was a solo homer hit by Dylan Rosa in the second to tie the game at 1.

Rosa went 2-3 at the plate in game one. Brady Policelli also had a two-hit game for the Flying Tigers.

Andrew Moritz and Riley Delgado led off the first with knocks against RHP Spenser Watkins. Jefrey Ramos grounded into a double play, but Moritz scored on the play for a 1-0 Florida edge.

Moritz recorded his tenth multi-hit effort of his Fire Frogs campaign by going 2-4 at the dish.

Watkins' first start with the Flying Tigers was a quality one, twirling six one-run frames of four-hit baseball, permitting one walk and mixing in six punch outs.

The Fire Frogs got to RHP Angel DeJesus for the winning run in the seventh. After a Kevin Josephina single led off the stanza, Logan Brown poked a single to center to plate him for the lead. Shean Michel's RBI triple two batters later sent Brown in for some important insurance; 3-1 Fire Frogs.

RHP Sean McLaughlin yielded two base hits but no runs in the bottom half to secure his fourth save and the victory for Florida.

Game 2: The Flying Tigers used the long ball to gain an early 2-0 advantage from RHP Brooks Wilson. Rosa went deep again to left and Nick Ames followed with a solo shot in that direction.

Wilson was not involved in the decision, giving up five hits and two runs with four Ks across five innings.

The Fire Frogs snagged a run back in the third. Brett Langhorne smoked a ball of the top of the left field fence for a double. Moritz sent him to plate with an RBI groundout to make it 2-1 Lakeland.

LHP Jared Tobey also received a no-decision in his first start of the season for the Flying Tigers, allowing a single tally over three frames.

Florida forced LHP Max Green out of the game after 2 and 1/3's innings with singles from Delgado and Ramos to start a sixth inning charge. RHP Billy Lescher entered and got the first two men, but surrendered a two-out, two-run single to Zack Soria to flip a 2-1 Fire Frogs deficit into a 3-2 lead.

Lescher (2-2) blew his second save try but went on to snare his second victory of the year, holding Florida to three hits and no runs while racking up four punch outs.

RHP Caleb Dirks made a good impression in his first outing with Florida since undergoing Tommy John surgery, giving up an innocent base hit as part of a scoreless stanza.

The first four Flying Tigers reached base against RHP Brandon White in the seventh, with Jon Rosoff's double tying the game at 3. He then settled in, getting Rosa to ground into a force out and fanning Policelli and Ames to escape the bases loaded, no out jam and extend the contest.

After Florida couldn't bring anything across in the top of the eighth, Lakeland used small ball tactics to prevail, 4-3. A.J. Simcox moved placed runner Cole Peterson over on a bunt. After a walk to John Valente, Reece Hampton successfully bunted down the first base line to plate Peterson and end the game.

Hampton swatted 2-2 with a walk, and RBI, and a run. Rosa finished off the double header with two more hits in the night cap.

Delgado, Josephina, and Michel all reached base twice in game two.

After tomorrow night's contest, Florida will have a short turnaround and return home to play a seven-game home stand over eight days beginning on Thursday afternoon against Daytona.

Don't miss out on all the fun at the Pond: https://www.milb.com/florida/tickets/promotions