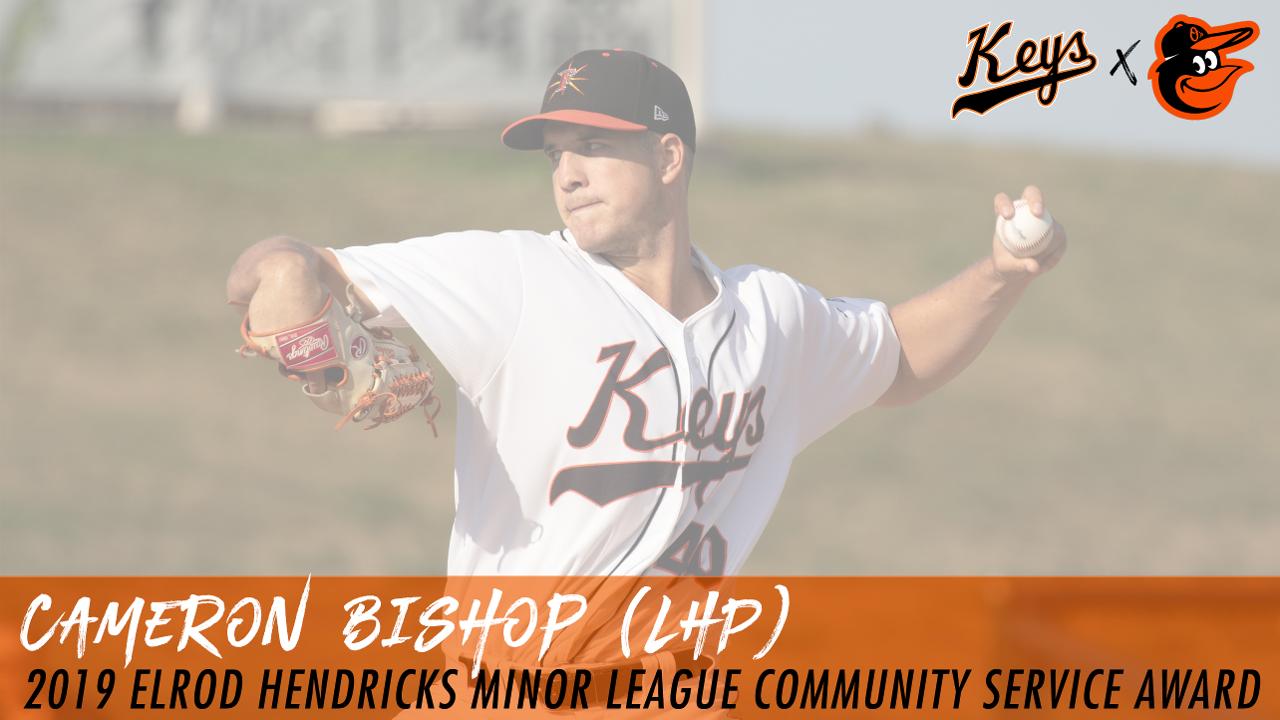 FREDERICK, MD - The Baltimore Orioles announced that Frederick Keys pitcher, Cameron Bishop , has been named the winner of the Elrod Hendricks Award. Given out since 1992, this award recognizes one minor league player whose level of community involvement is worthy of special recognition that truly stands out within the Orioles organization. The announcement came along with the rest of the Orioles player development and scouting awards for 2019.

Bishop, 23, becomes the fourth Keys player to win the Hendricks award in the last eight seasons. Former pitcher, Mark Blackmar , won the award in 2014, while infielder Anthony Caronia and pitcher Trent Howard received this honor in 2013 and 2012 respectively. A team that consistently does good work in the Frederick community and beyond, the Keys have had eight winners of the Hendricks award since 2004.

This past season, Bishop visited various Frederick County libraries to read to children, took part in a sign language video with students from the Maryland School for the Deaf and served as a camp counselor at both sessions of Keys Baseball Camp.

"Cam was great with everyone he encountered and was especially great with the kids from the Maryland School for the Deaf," said Keys Director of Marketing Erin Lawson. "Whenever we needed help with an appearance, camp or other event he was always there to help."

To go along with winning the Hendricks award, Bishop was the recipient of the Steve Bechler Award at the end of the Keys regular season. This recognizes the Keys player who best represents the value, character and commitment of Joel Stephens in community service.

The Bechler award is named after the late Orioles pitcher who passed away unexpectedly during a spring training workout in 2003. A member of the Keys from 2000-2001, Bechler was very active in "Joel's Kids" the forerunner to Frederick Keys Care, which provides direct aid to youth and young adults in Frederick County.

In addition to Bishop, former Keys infielder, Ryan Mountcastle , was named the Brooks Robinson Minor League Player of the Year and former Keys starting pitcher, Mike Baumann, was named the Jim Palmer Minor League Co-Pitcher of the Year along with Grayson Rodriguez from Low-A Delmarva. A midseason all-star with Frederick this season, Baumann went a combined 7-6 with a 2.98 ERA (210 IP/41ER) to go with 142 strikeouts between the Keys and Double-A Bowie. With the Baysox, he threw a no-hitter on July 16 against Harrisburg.

Bishop, Mountcastle and Baumann will all be honored on the field before the Orioles game against the Seattle Mariners on Saturday night at 7:05 p.m. Preparations for the 2020 Keys season are already underway. For news and to book tickets for next season, fans can visit frederickkeys.com.