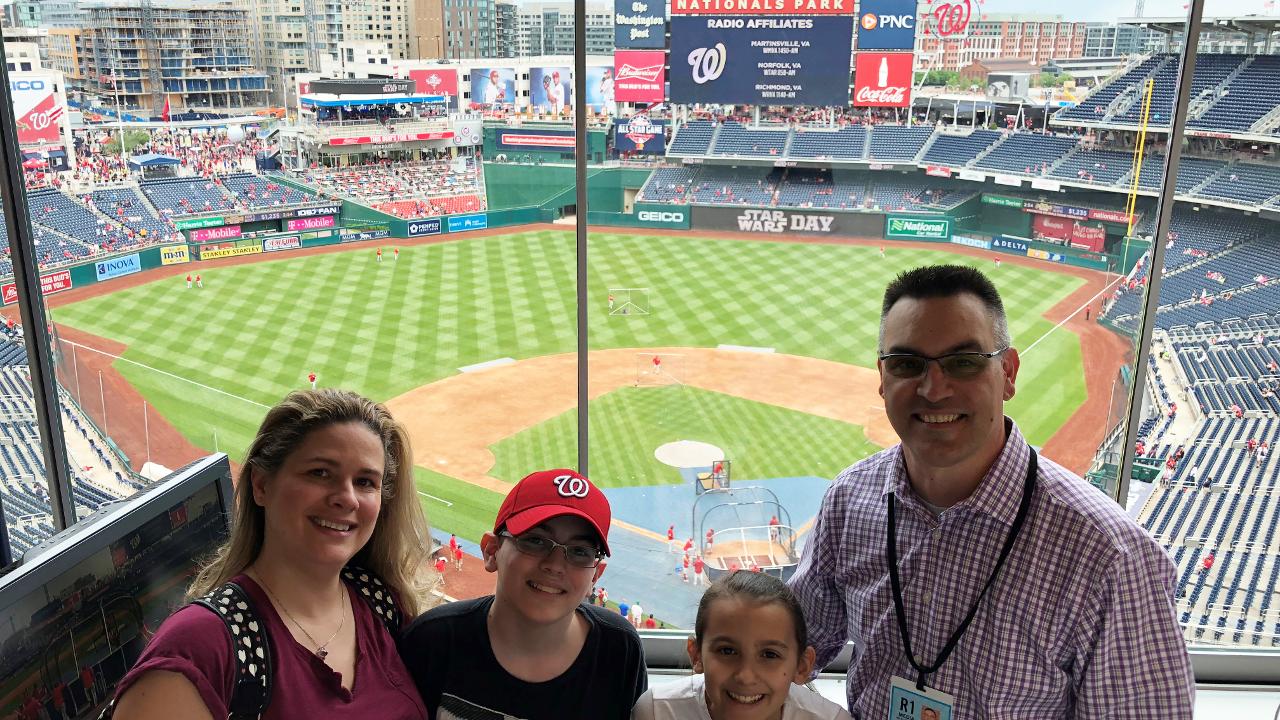 Hetrick at Nationals Park along with Wife, Carrie, son, Dylan and daughter, Courtney.

FREDERICK, MD -Although you may not be able to see him on the field, there is one Frederick Keys connection to this year's Fall Classic. Up in the pressbox, longtime Keys official scorer, Dennis Hetrick, will serve as the scorer for game four of the World Series between the Washington Nationals and the Houston Astros. The series will shift to Nationals Ballpark on Friday.

"[Nationals lead scorer] Ben Trittipoe came up with a schedule right about the last week of the season," said Hetrick. We've split [the postseason] the whole way so far. It shows the kind of person [Ben is] when somebody may have done it differently."

Overall Hetrick has worked three playoff games so far. This includes the exciting NL Wildcard game, where Juan Soto's go-ahead single lifted Washington to a 4-3 victory over the Milwaukee Brewers.

"It was a great environment to be in and I didn't know how I would react," Hetrick said. "But surprisingly, I wasn't nervous at all."

He was even able to keep his cool in the eighth inning, when a misplay by Brewers right fielder Trent Grisham would give the Nationals the lead for good.

"When the ball got by the right fielder the place just exploded," Hetrick said. "And it was a real rush to work in that environment too. When that play happened, there were 3-4 different things about that play that the official scorer has to do, and it was neat to have to perform all that while the crowd was going nuts."

If that was not enough, Hetrick got to score an NLDS game against the Dodgers and game four of the NLCS against St. Louis when the Nationals won the pennant. In 2018, the Mount Airy native also had the opportunity to score the Futures Game (as part of the weekend festivities leading up to the Major League All-Star Game).

Hetrick started scoring professional baseball for the Keys in 2003, when his former American Legion baseball coach, George Richardson, needed some help doing the games. In 2014, Hetrick started working Major League games part time and now does a full schedule for the Nationals alongside Trittipoe.

As Hetrick prepares to possibly oversee the Nationals celebrate their first World Series, he is grateful for all the lessons he's learned and the people who have spent time teaching him about the game.

"We've all had mentors. My first was George Richardson with the Keys as well as coaches, the people I've worked with in the pressbox, managers of the teams. Even though all those conversations were not always pleasant or comfortable, it really helped me learn and get better and get to this point. There are a lot of people who I can thank."