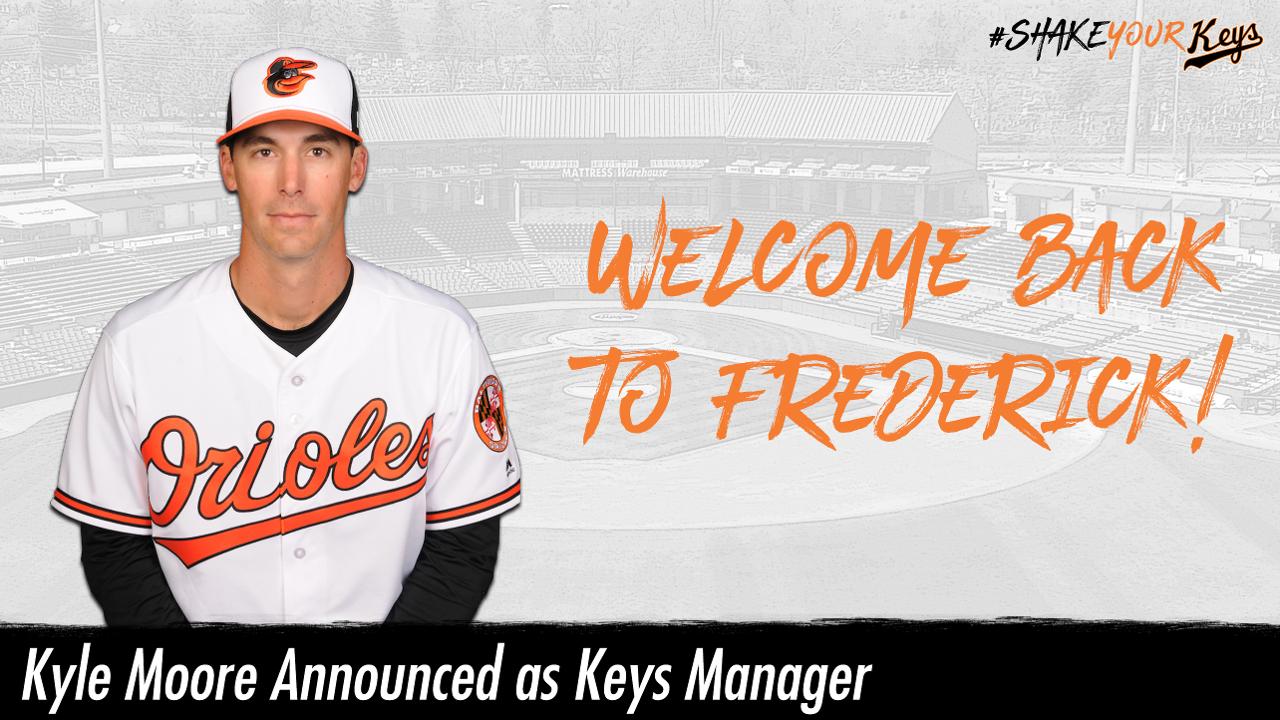 FREDERICK, MD -The Baltimore Orioles have announced their minor league coaching staffs for the 2020 season and the Frederick Keys will feature a familiar face as their manager for next season. Former hitting coach, Kyle Moore, is set to lead the Keys in 2020 after serving as the Low-A Delmarva Shorebirds Manager in 2019. Moore will be joined by Pitching Coach Josh Conway , Hitting Coach Tom Eller and Development Coach David Barry. To go this, former Keys infielder, Collin Woody , rejoins the team as Fundamentals Coach and Marty Brinker returns as Athletic Trainer.

Moore enters his third season as a manager in the Orioles minor league system and his 11th overall as a member of the organization. As the skipper for Delmarva in 2019, Moore led the Shorebirds to a 90-48 record. The 90 wins were the most in affiliated Minor League Baseball last season, while the Shorebirds owned the top winning percentage among full season minor league clubs (as well as a Shorebirds franchise record). Named "Team of the Year" by MiLB.com, the Shorebirds reached the South Atlantic League playoffs for the first time since 2005.

Moore previously served as the Keys Hitting Coach from 2017-18. In 2018, Moore left Frederick to make his managerial debut with the Short-Season Aberdeen IronBirds. In addition to his time with the Keys, Moore served as Delmarva's hitting coach (2015) as well as a player/coach with Delmarva, Frederick and Double-A Bowie and one season as a Strength and Conditioning Coach for the Shorebirds in 2012. The former Alabama product played two seasons with the Orioles minor league system in 2010-11.

Conway begins his first season as the Keys pitching coach after spending the 2019 season as Bowie's Development Coach. From nearby Smithsburg, MD, Conway went to Smithsburg High School and was drafted by Atlanta before attending Coastal Carolina University. Drafted by the Chicago Cubs in the fourth round of the 2012 draft, Conway pitched three seasons in the Chicago minor league system, reaching as high as Double-A. This included a strong stint with the Carolina League's Myrtle Beach Pelicans in 2015, where he went 2-2 with a 2.92 ERA in 34 relief outings.

Going into his first season as the Keys Hitting Coach, Eller starts his second season as a member of the Orioles organization. Serving as the Hitting Coach for Short-Season Aberdeen in 2019, Eller helped the IronBirds finish in the top three in the league in home runs, slugging percentage and OPS. Previously, Eller spent 12 seasons as the Head Coach of the Harford Community College baseball team. There, he led the Fighting Owls to a 433-230-2 record and five Region XX Championships. He received his bachelor's degree from Wilmington University and his master's in sports management from Millersville University.

Transitioning to the coaching ranks, Woody takes over as the Keys Fundamentals Coach. Originally a 38th round out of UNC-Greensboro in 2016, the utility man played for the Keys in 2018, hitting 10 home runs in 79 games. Woody spent the previous four seasons in Baltimore's minor league system. Barry joins the Keys as Development Coach after working as Delmarva's Video Technician in 2019. Previously, he worked as a Baseball Operations Intern with the Houston Astros and as a Baseball Operations Manager for the Indiana University baseball team.

Going into his third season as the Keys Athletic Trainer, Brinker recently served as one of two athletic trainers for the Surprise Saguaros in the Arizona Fall League. A member of the Orioles Sports Medicine Staff since 2015, Brinker previously spent time with Delmarva (2017) and Aberdeen (2015-16) before coming to the Keys. Formerly, he was a trainer for the Army West Point football team as well as for the University of Akron and the Mahoning Valley Scrappers. Brinker received his bachelor's degree in athletic training from Capital University and his master's in exercise physiology/adult fitness from the University of Akron.

The Keys kickoff their season on Thursday, April 9. A link to the entire schedule for the Keys 2020 season is available here while fireworks shows are scheduled for Fridays and Saturday night games and other select games during the season. To stay tuned for the latest team news and for ticket information fans can visit frederickkeys.com and follow the team on Twitter (@frederickkeys), Facebook and Instagram (@frederickkeys.com).