P-Nats end an era with success on, off field 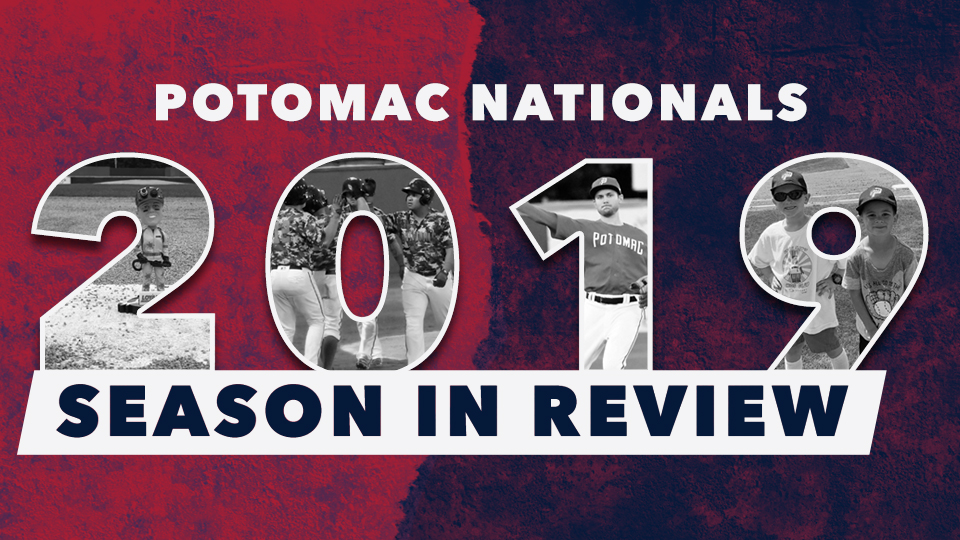 Woodbridge, VA---Though their 2019 season ended just shy of a return to the Carolina League Playoffs, the Potomac Nationals enjoyed a memorable and successful final year in Woodbridge before their move to Fredericksburg in 2020. With an exciting on-field product and some of the best promotional nights in Minor League Baseball, the end of an era gives reason for optimism in the years to come.

Led by all-time franchise leader in managerial wins Tripp Keister, the P-Nats overcame a slow start to contend for a playoff spot until the final days of the regular season. A 40-30 second half gave the P-Nats an overall record of 70-67, second-best in the Northern Division. Year-end All-Stars 2B Cole Freeman and 1B Aldrem Corredor led the way offensively, with Freeman pacing the league in run scored (82) and hits (141), with Corredor collecting a league-best 89 RBIs.

The 2019 Potomac Nationals broke camp in April with a squad that looked quite similar to the 2018 roster that came within one game of a Mills Cup Championship. OF Telmito Agustin led a list of five Potomac players on MLB Pipeline's Top 30 Prospects list, followed by LHP Nick Raquet, RHP Luis Reyes, RHP Kyle Johnston and RHP Jackson Tetreault. Despite a veteran clubhouse, Potomac scuffled out of the gate with a 15-0 loss to the Fayetteville Woodpeckers on Opening Night, a 9-17 record in the season's first month, and a team earned run average of 6.02.

Amidst the struggle in the opening weeks of the season came a few bright spots. Tetreault, rated as the #27 prospect in the organization, was the first Potomac player to receive a promotion to Double-A after going 2-1 with a 1.23 earned run average in his first four starts. C Alex Dunlap made his Carolina League debut in game two of a doubleheader against Fayetteville on April 6th, securing a twin bill sweep with a walk-off three-run homer in the bottom of the seventh inning.

Things slowly turned around as April turned to May thanks to some call-ups from Class-A Hagerstown. OF Gage Canning arrived on April 14th, homered in his first game, and immediately became the top prospect on the roster. 1B KJ Harrison, who was leading the South Atlantic League in batting average at the time of his promotion on April 26th, delivered the game-winning double against the Carolina Mudcats in his debut appearance as part of a four-hit night.

A morning game on May 1st at Winston-Salem signaled a turning point for the P-Nats as they erupted for an 18-4 win over the Dash in an historic performance. Their 18 runs, led by a five-hit performance from SS David Masters and another four-hit game from Harrison, marked the most in a single game for a Potomac team since the 2006 season. It also began a stretch of much more consistent baseball, in which the P-Nats went the entire month of May without a winning or losing streak of more than three games. With an overall record of 13-14, an improved earned run average of 3.78, and a more potent offensive attack, the P-Nats turned their season around in the season's second month.

May also saw the emergence of Potomac's staff ace, as Johnston overcame a slow start to become one of the Carolina League's most dependable pitchers. The righty went 4-1 with a 2.03 earned run average over five starts, holding opponents to a .200 batting average to stabilize what had become a volatile rotation. Johnston would finish his P-Nats tenure with a 9-9 record, a 4.03 ERA, and a league-best 100 strikeouts before his trade to the Toronto Blue Jays on July 31st in exchange for RHP Daniel Hudson.

The relief corps also became a strength in May, thanks to the addition of several new faces. LHP Carson Teel slotted into a swingman role, allowing one run in 16.0 May innings as he jumped between the rotation and bullpen. RHP Andrew Istler, acquired from the Dodgers in a 2018 trade, did not allow an earned run in his first 10 outings. And RHP Jhonatan German quickly became a late-inning option as the young righty racked up six saves in seven tries before his promotion to Double-A Harrisburg.

June brought remarkable roster stability and continued improvements as the P-Nats went 12-13 with a .264 batting average and a 3.31 team ERA. Potomac earned their first three-game sweep of the season in their only trip to Salem from June 2nd-4th, kickstarted by a series-opening 9-6 comeback win made possible by a three-run double from Freeman and a three-run homer from Masters just minutes apart in the seventh inning. Masters ranked tied for first in the Carolina League with nine home runs before a long stay on the injured list, followed by a long-awaited promotion to Double-A in July.

Though a division title was out of reach, Potomac entered the All-Star break on a high note with a thrilling 15-4 victory in their first half finale at Fayetteville on June 16th. Trailing 4-3 with two outs in the eighth, Canning drew a bases-loaded walk to tie the game before OF Nick Banks hit a go-ahead grand slam. The contest became a rout as the P-Nats poured it on, scoring nine runs in the inning to finish the first half with a 30-37 record. The mark was good for third place in the Northern Division, behind the first-place Wilmington Blue Rocks and the second-place Lynchburg Hillcats.

The P-Nats were represented by Freeman, Corredor, Banks, C Jakson Reetz and RHP Andrew Lee at the Carolina League All-Star Classic in Frederick, with all four position players earning a starting role. Banks continued his hot hitting with a game-winning three-run homer in the eighth inning, guiding the Northern Division to an 8-7 win and earning game MVP honors along the way.

The second half began with a blowout 15-2 victory over the Carolina Mudcats, featuring a two-homer game for Reetz. The Potomac catcher earned his All-Star honors with a .220 average in the first half, but supplemented his solid defense with a potent bat in the second half. 12 of his 13 home runs came after the All-Star break, with a stellar .282 average to become a centerpiece of the P-Nats lineup.

As the calendar turned to July, improved starting pitching helped the P-Nats to their first winning month with a 16-12 record. LHP Tim Cate, promoted to the P-Nats in late June, showed why he was one of the top pitching prospects in the Nationals organization as he quickly acclimated to the Carolina League. The lefty earned his first win with a seven-inning complete game on July 3rd at Wilmington, and finished his debut season in the league with a 7-4 record and a 3.31 ERA in 13 starts.

The P-Nats developed a flair for the dramatic in July, walking off for four home wins and completing four comebacks when trailing in the seventh inning or later. Three of the walk-off wins in the month came against Fayetteville, highlighted by a Banks solo homer on July 7th and a Reetz two-run single to set up a Bryan Mejia fielder's choice two nights later.

Potomac ended July with a 7-6, 10-inning victory over Salem with a Canning walk-off squeeze bunt. The winning continued into August as the P-Nats completed a sweep of the Red Sox and swept the Blue Rocks in Wilmington for a season-high six-game winning streak. With a subsequent series victory in Frederick, the P-Nats captured a half-game lead in first place in the Northern Division for the first time all season.

Though a home sweep at the hands of the Hillcats would follow their hot streak, a strong finish to the month gave the P-Nats an 18-11 record in August to remain in the playoff hunt. Potomac won eight of nine to end the month, including a doubleheader sweep of the Keys in Frederick on August 31st, to climb within 2.0 games of first place with two games to play. Every facet of the game was at its best in August, as Corredor rode a 19-game hitting streak to a .323 average and Cate went 4-1 with a 2.65 ERA in six starts. Teel, firmly entrenched in the rotation, went 2-1 with a 0.87 ERA in five starts to earn August Carolina League Player of the Month honors.

Potomac's playoff hopes were officially dashed on the second-to-last day of the regular season as the Red Sox won their game against Carolina to clinch the second half division title. Potomac finished winning 10 of their final 11 games.

The P-Nats welcomed six Nationals big-leaguers on rehab assignments over the course of the 2019 season. RHP Justin Miller, LHP Tony Sipp, RHP Kyle Barraclough and LHP Sean Doolittle toed the rubber as relief pitchers, SS Trea Turner played in two games in May, and 1B Ryan Zimmerman went 9-for-21 over the course of six August games.

RHP Frankie Bartow led the team with 10 saves as he posted a 0.40 earned run average in the second half, Reyes took to a mid-season shift to the bullpen as he notched a team-best 23.0 consecutive scoreless innings from May 10th to June 21st, and Raquet finished as the team's leader in most pitching categories with 11 wins, 122 strikeouts and 130.1 innings pitched.

Long renowned for their unique and inventive promotions, the P-Nats celebrated their final year at Northwest Federal Field at Pfitzner Stadium in style with another solid slate of eye-catching fan opportunities. 192,474 fans came through the gates over 59 home dates, including four sellouts, as giveaways, celebrities and theme nights provided more reasons than ever to spend a night at the ballpark.

Bobbleheads were once again a centerpiece of the Potomac promotional calendar in 2019. An Adam Eaton "Mighty Mouse" bobblehead, "Indiana Strasburg" Temple of Doom bobblehead, Carter Kieboom Ghostbusters bobblehead, Juan Soto "Road to the Show" bobblehead, John Kinsella Field of Dreams bobblehead, and Victor Robles "#1 Nats Prospect" bobblehead ensured that there was a bobblehead for fans of all ages and interests.

Beyond an already impressive lineup of bobbleheads in 2019, the P-Nats also issued premium giveaway items. Whether it was a P-Nats camo hat, a Juan Soto puzzle, a P-Nats grill apron, a Juan Soto P-Nats shirt, or a Mini Northwest Federal Field at Pfitzner Stadium replica, early arriving fans received a piece of Potomac Nationals history.

P-NATS IN THE COMMUNITY

The Potomac Nationals continued their community outreach in 2019 with a variety of programs, raising $155,000 in funds for non-profit enterprises and P-Nats Charities. The club also made donations of more than $24,500 to various charities through seven different jersey auctions, all of which benefitted the local community.

Uncle Slam's Reading Program partnered with 80 area elementary schools as it entered its second decade introducing kids to the joy of reading. The reading program brought thousands of students from around the area to Northwest Federal Field. Through visits at local schools with Uncle Slam and P-Nats representatives, kids could read four books, and then come out to a game for free. For the third straight year, Uncle Slam's Reading program set a new high mark for the number of schools reached as well as the number of participants.

Continuing a proud tradition of supporting the military and their families, the P-Nats wore special camouflage jerseys on home Sunday games in 2019 and auctioned them off in August to benefit Women Veterans Interactive. Combined with the expansion of the "Tripp's Troops" ticket program for military families, these efforts represent just a small token of the worthy gratitude the Potomac Nationals feel towards those who serve.

On the health awareness front, Potomac partnered with Sentara for Strikeout Stroke Night and Stop the Bleed Night and Mary Washington Healthcare for Health and Wellness Night. The P-Nats also partnered with the Joe Torre Safe at Home Foundation, Ed Randall's Fans for the Cure and raised awareness for sun safety in association with the American Cancer Society.