Cate Outdueled by Patterson in 3-0 Loss 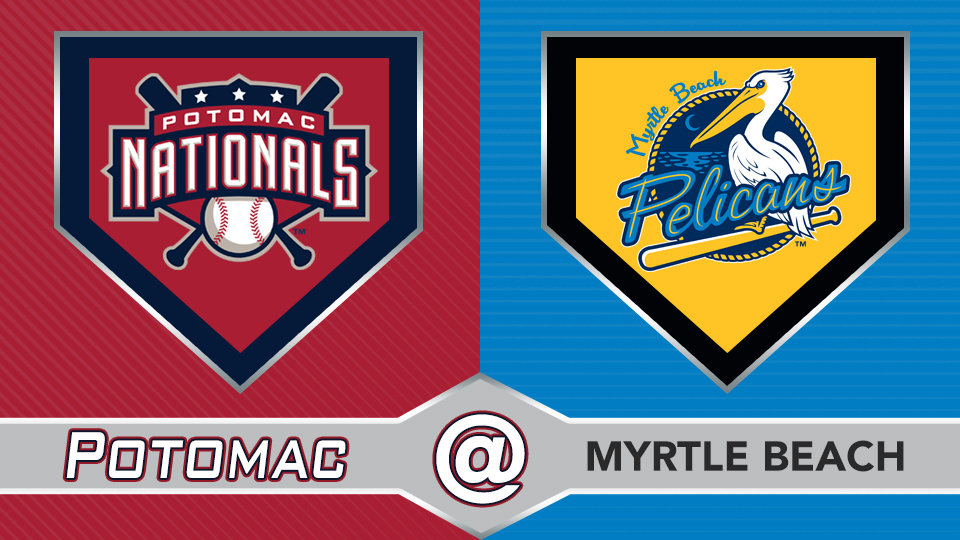 Myrtle Beach, SC-The Potomac Nationals (9-11, 39-48) embarked on a six-game road trip on Wednesday, and entered their Southern swing with a three-game winning streak. A game shy of their season-high in consecutive wins, they saw their momentum halted as they fell 3-0 to the Myrtle Beach Pelicans (11-10, 32-56) in the opener of a three-game series.

LHP Tim Cate (L, 1-2) allowed only an unearned run on four hits over 6.0 innings, but took the tough-luck loss as LHP Jack Patterson (W, 1-0) faced the minimum in his five-inning start to earn his first Carolina League win.

Cate, fresh off a his first career complete game last week in Wilmington, got into trouble in the second after a leadoff single to C Miguel Amaya. With one out, SS Aramis Ademan hit a grounder that was bobbled by 2B Bryan Mejia and allowed Amaya to reach second base. Cate then issued a pair of walks to DH Tyler Payne and RF Kevonte Mitchell, scoring what would turn out to be the winning run.

Potomac's lone hit against Patterson came in the third, when RF Telmito Agustin hit a deflected grounder off the pitcher. The Pelicans would quickly atone, however, as Amaya threw out Agustin trying to steal second base. Patterson, the Cubs' Minor League Pitcher of the Month for June, extended his scoreless innings streak to 19.0 dating back to his tenure in the Midwest League.

SS Gilbert Lara greeted RHP Jesus Camargo with a leadoff single in the sixth, and got to third on a stolen base and wild pitch. LF Jack Sundberg, making his first P-Nats appearance since April due to a hand injury, almost tied the game with a hard grounder to first base but 1B Cam Balego stayed with a bad bounce to retire the speedy batter and preserve the Myrtle Beach lead.

In the seventh, RHP Jorge Pantoja allowed an insurance run to score after LF Zach Davis hit a one-out double. 3B Delvin Zinn hit a grounder to third base, but Davis advanced to third on the throw and scored when 3B Osvaldo Abreu dropped a return throw from across the diamond. Balego hit his 10th homer in the eighth to extend the Pelicans lead to 3-0.

The P-Nats will look to get back in the win column on Thursday night as they continue their series against the Pelicans. LHP Carson Teel faces off against RHP Alexander Vargas in game two of three. First pitch from TicketReturn.com Field is set for 7:05 pm, with the P-Nats Leadoff Show starting at 6:50 on potomacnationals.com or the TuneIn Radio App.