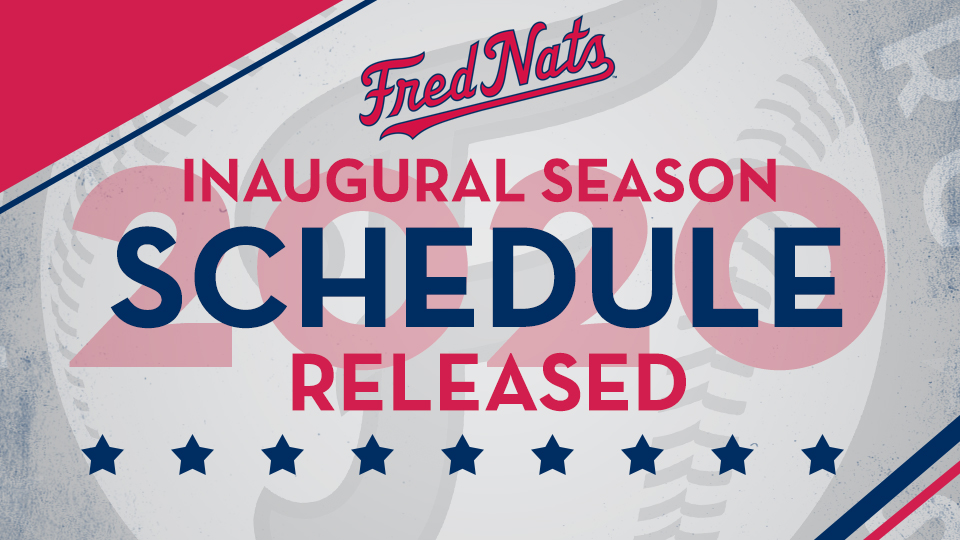 FREDERICKSBURG, Va. - The Fredericksburg Nationals, formerly known as the Potomac Nationals, are pleased to announce their 2020 schedule. The inaugural season to be played in their new ballpark in Fredericksburg, VA, will feature 14 homestands boasting 70 total home games against all nine other Carolina League teams.

The FredNats will kick off the 2020 season with a 14-game road trip starting at Grainger Stadium in Kinston, NC, for a four-game series against the Down East Wood Ducks (Texas Rangers). The team will then travel to face off against the Myrtle Beach Pelicans (Chicago Cubs) for a three-game series starting on Monday, April 13 and the Fayetteville Woodpeckers (Houston Astros) for a four-game series starting on Thursday, April 16. The FredNats will play their final three-games of the roadtrip against the Winston-Salem Dash (Chicago White Sox) from Monday, April 20 to Wednesday, April 22.

The Fredericksburg Nationals will open their new stadium on Thursday, April 23, 2020 against the Frederick Keys, the affiliate of the Baltimore Orioles, kicking off their first weekend four-game homestand.

May will be a busy month for the FredNats with 20 home games spread among four homestands and three roadtrips, comprising 10 games. Monday, May 11th will be the only day off for the FredNats for the entire month.

The Fredericksburg Nationals will face off against the other Carolina League teams in the following order of appearance:

Down East Wood Ducks (Texas Rangers): nine at home, seven on the road.