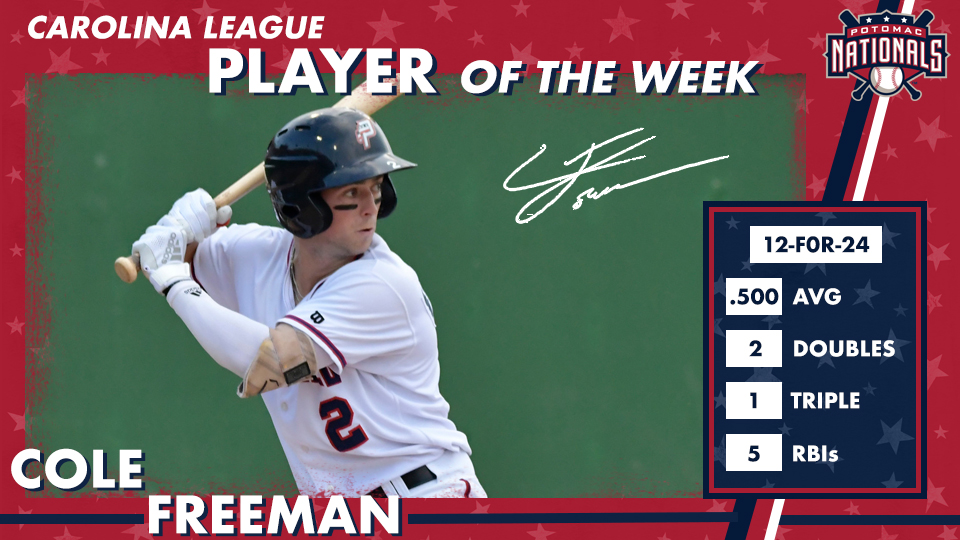 The most consistent hitter for Potomac through the team's first 91 games, Freeman enters Monday night's matchup with the Fayetteville Woodpeckers as the team leader in batting average (.314), runs scored (57), and stolen bases (23). The 24-year-old ranks among the top five in the Carolina League in each statistic, as he sits second on the circuit in batting average, second in runs scored, and third in stolen bases.

Named a 2019 Carolina League Mid-Season All-Star, this is Freeman's first Player of the Week Award as a professional. He was also named an MILB.com Organizational All-Star for his 2018 season.

The P-Nats are set to wrap up a three-game series this evening vs. the Fayetteville Woodpeckers (Houston Astros). With just about two months remaining in the 2019 Carolina League regular season, Potomac sits 5.0 games back of the Salem Red Sox (Boston Red Sox) for a playoff spot in the Northern Division. First pitch on Monday night vs. Fayetteville is scheduled for 7:00pm.

P-Nats' 2019 ticket plans and group outings are currently available for purchase. For more information, or to purchase any of these plans, contact Potomac Nationals Director of Season Ticket and Group Ticket Sales, Alec Manriquez, by phone at 703-590-2311, ext. 221, or via e-mail at amanriquez@potomacnationals.com.