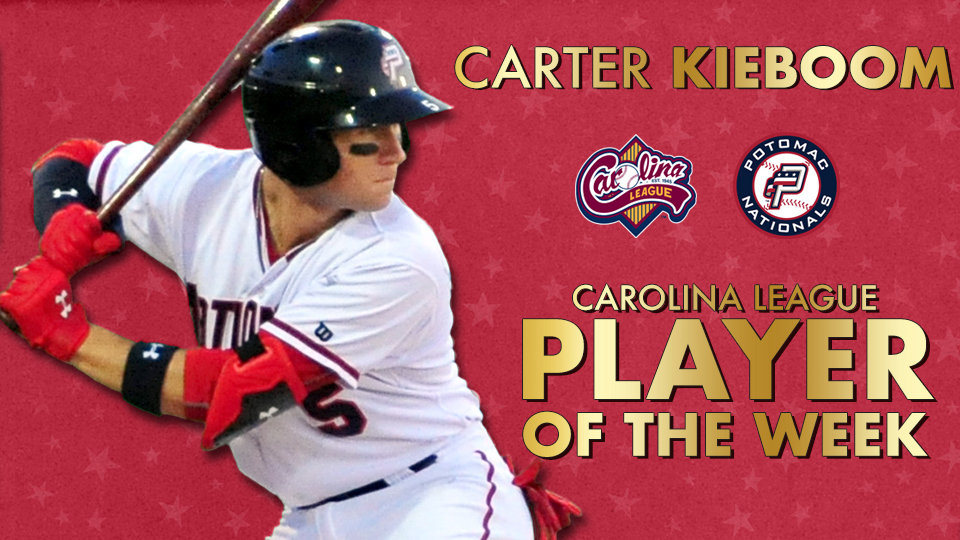 Kieboom, who started the season with Potomac, got off to a slow start, but has been one of the hottest hitters in Minor League Baseball over the past two weeks. During his active 10-game hit streak, the shortstop has hit .487 (19-39) with seven extra-base hits and 11 RBIs. Kieboom has recorded multiple hits in seven of his last eight games.

This past week, Kieboom recorded a hit in every game that Potomac played, and multiple hits in six of seven games. He hit .556 (15-27) with four doubles, a home run, and six RBIs. He had more walks (seven) than strikeouts (two) over that span, and raised his batting average more than 60 points in the last week.

A first round pick by the Washington Nationals in 2016, Kieboom only appeared in 61 games in his first full season, 2017, due to injury. He hit .296 with eight home runs in 48 games for Class-A Hagerstown, but earned the 2018 start with the Potomac Nationals as the everyday shortstop despite a limited number of games as a professional.

This is the first Player of the Week award for Kieboom as a professional, though he was named an Organizational All-Star for Washington by MiLB.com for the 2017 season.

The P-Nats open up a three-game homestand on Tuesday night, with the series opener vs. the Salem Red Sox (Boston). First pitch is set for 7:05pm.

P-Nats' 2018 ticket plans and group outings are currently available for purchase. For more information, or to purchase any of these plans, contact Potomac Nationals Director of Season Ticket and Group Ticket Sales, Alec Manriquez, by phone at 703-590-2311, ext. 221, or via e-mail at amanriquez@potomacnationals.com.