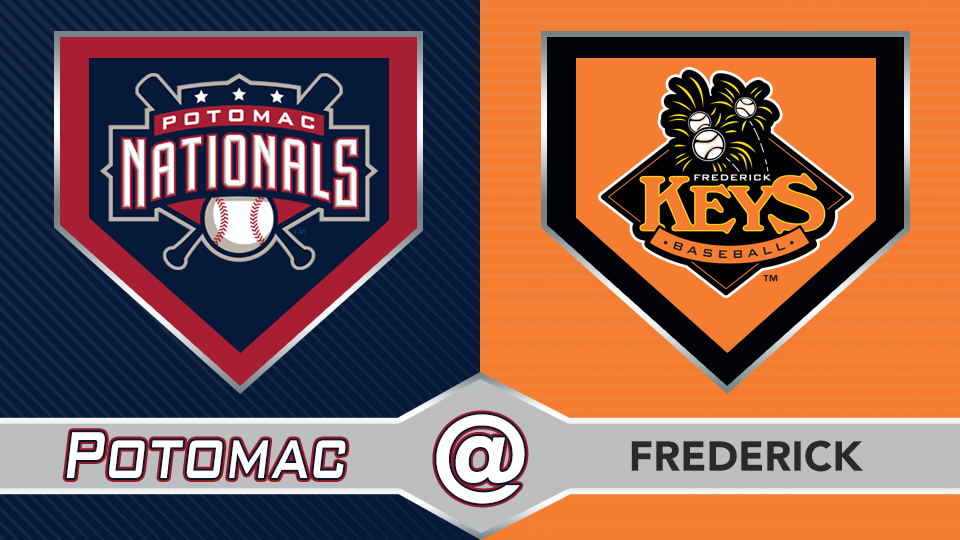 Frederick, MD-With no margin for error, the Potomac Nationals (38-30, 68-67) swept a doubleheader over the Frederick Keys (24-42, 53-82) on Saturday night to extend their winning streak to five games. A comeback 7-5 win in game one was followed by a 4-1 victory in the nightcap as the P-Nats kept their playoff hopes alive.

The P-Nats trail the first-place Salem Red Sox with 2.0 games with two days remaining in the regular season. The Red Sox, who won their Saturday game against the Carolina Mudcats, would have to lose their final two games to open the door for the P-Nats to earn a spot in the postseason.

Potomac jumped out to a fast start in game one, getting back-to-back singles from RF Jack Sundberg and CF Cole Freeman before 1B KJ Harrison laced an RBI single for a 1-0 lead. Frederick would answer in their half of the first inning against LHP Tim Cate (W, 7-4), who issued a leadoff single to CF Cole Billingsley before a run-scoring fielder's choice from RF Zach Jarrett tied the game 1-1. Cate allowed a career-high 10 hits over 5.1 innings, but allowed only three earned runs as he earned his seventh win.

2B Osvaldo Abreu led off the second with a solo homer, his fourth of the year, to put Potomac back in front, but Keys 2B Chris Clare delivered a two-out, two-run single in the third to give Frederick their first lead of the series. An Abreu error with two outs in the fourth opened the door for back-to-back singles from Billingsley and SS Sean Miller to put the Keys up 5-2.

LF Aldrem Corredor cut into the deficit off LHP Cameron Bishop in the fifth on a run-scoring double play grounder, and Harrison followed with his second RBI single to make it a 5-4 game. Cate rebounded with a scoreless fifth, setting the stage for a late Potomac rally.

RHP Diogenes Almengo (L, 5-5) came on for the sixth for a save opportunity, but allowed doubles to C Alex Dunlap and SS Gilbert Lara to tie the game 5-5. With two outs and two on, Freeman ripped a two-run double down the left field line for the eventual game-winning hit. RHP Frankie Bartow (S, 10) stranded two of Cate's runners in the sixth and one of his own in the seventh for a five-out save.

In game two, the Keys were the ones to take an early lead off RHP Luis Reyes (W, 5-5) in his first start in more than a month. Miller tripled to right field, Jarret singled him home through a drawn-in infield, and Frederick had a brief 1-0 advantage. LF Telmito Agustin tied the game in the second with a solo homer off RHP Luis Pérez (L, 6-2), and the game would remain tied 1-1 heading to the middle innings. Reyes turned in his longest outing of the year, tossing 5.1 innings of one-run ball for his fifth win of the year.

In the fifth, Freeman reached when his hot grounder to Miller skipped into left-center field and stole his team-leading 31st base of the year to get into scoring position. Corredor came through once more with a go-ahead RBI single to put the P-Nats up 2-1. Corredor doubled home an insurance run in the seventh, RF Gage Canning followed with a run-scoring single of his own, and LHP Hayden Howard (S, 3) relieved Reyes for a five-out save to seal the sweep.

The P-Nats play their penultimate game of the season as LHP Nick Raquet squares off against Keys RHP Blaine Knight on Sunday night. First pitch from Nymeo Field is set for 6:00 pm, with the P-Nats Leadoff Show beginning at 5:45. Fans can listen to the Potomac broadcast at potomacnationals.com or on the TuneIn Radio App.