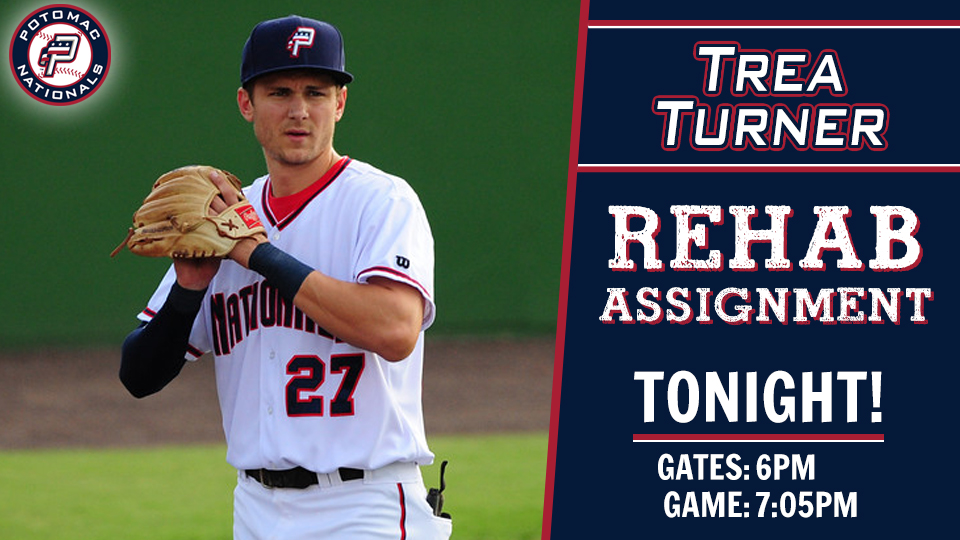 Woodbridge, VA---The Washington Nationals have assigned SS Trea Turner  to the Potomac Nationals, where he will begin a rehabilitation assignment. The Nationals' starting shortstop will join the P-Nats on Tuesday night, as they face the Carolina League's current top team, the Down East Wood Ducks (Texas Rangers). The length of Turner's rehab assignments is to be determined. First pitch Tuesday night is scheduled for 7:05pm.

The 25-year-old Turner was placed on the 10-Day Injured List with a fractured right index finger on April 3rd, and Tuesday night will mark his first action since then.

Turner got off to a quick start for Washington in 2019, as he tallied five hits and scored four times in his first four games. The 2016 NL ROY runner up played every game for Washington in 2018, as Turner hit .271 with a league-best 43 stolen bases in 162 games last season. In 2018, Turner set career highs in games played, at-bats, runs scored, hits, doubles, home runs, and RBIs.

Acquired in December of 2014, Turner was the PTBNL in a deal between the Nationals, San Diego Padres, and Tampa Bay Rays. Turner joined RHP Joe Ross  in the move from San Diego to Washington. The Nationals traded OF Steven Souza to the Rays, while OF Wil Myers  was the primary player that moved from Tampa Bay to San Diego.

A first round pick, 13th overall by the Padres in the 2014 MLB Draft, Turner made his Major League debut with the Nationals on 8/21/15 vs. the Milwaukee Brewers. Splitting time between the infield and outfield for the Nationals in 2016, Turner finished second in the National League Rookie of the Year race to Los Angeles Dodgers SS Corey Seager . In 168 career games with the Nationals, Turner has hit .306, tallied 21 home runs, driven in 73, and stolen 70 bases.

Turner played four games with Potomac on rehab back in 2017. In his first ever games at the Carolina League level, Turner went 2-12 with a double and an RBI.

First pitch between Potomac and Down East on Tuesday night at Northwest Federal Field at Pfitzner Stadium is set for 7:05pm.