Keister and Ordaz Remain with the Franchise, Lord Joins as Pitching Coach 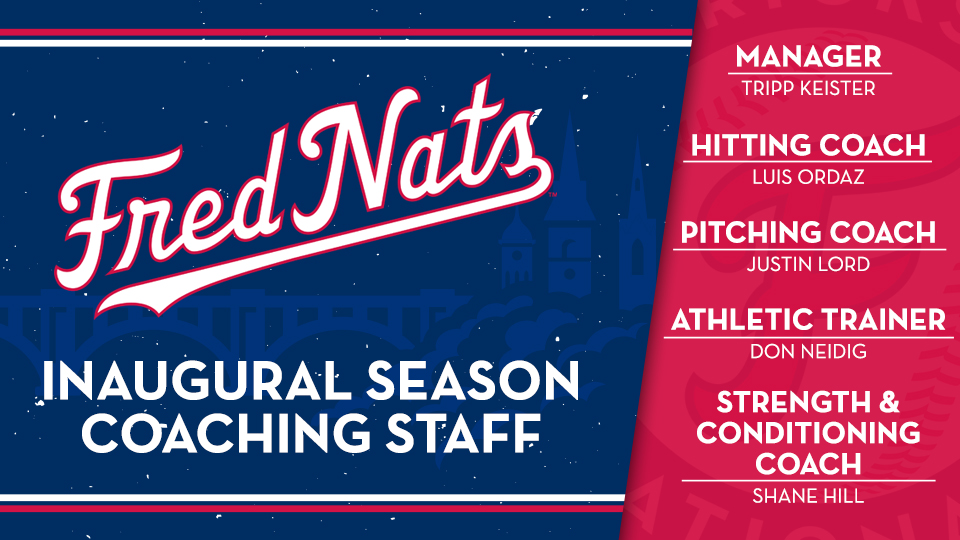 FREDERICKSBURG, VA- The Washington Nationals have announced the coaching staff for the Fredericksburg Nationals inaugural 2020 season. The FredNats will be reunited with former Potomac Nationals Manager Tripp Keister, Hitting Coach Luis Ordaz, Athletic Trainer Don Neidig, and Strength and Conditioning Coach Shane Hill. The FredNats will be welcoming Justin Lord in his first year as their Pitching Coach.

Keister is entering his seventh consecutive season as Manager with the franchise, and has managed 846 games, the most in franchise history with 423 regular season wins. Keister has previously managed two other levels in Washington's system, the Class-A Hagerstown Suns, and the Gulf Coast League Nationals. He also played four seasons in the New York Mets' Minor League system.

Ordaz will enter into his fifth consecutive season with the franchise and 10th season in the minor league system as Hitting Coach for the FredNats. Ordaz led the Potomac Nationals to the second-best batting average in the Carolina League during the 2019 season. Ordaz made 206 appearances at the Major League level between 1997 and 2006, with the St. Louis Cardinals, Kansas City Royals, and Tampa Bay Devil Rays.

This will be Neidig's third season with the franchise as the team's Athletic Trainer. Neidig joined the Potomac Nationals in 2017 after spending four seasons as the Athletic Trainer for the Hagerstown Suns.

Lord was previously signed by the Kansas City Royals as a non-drafted free agent out of Florida State in 2001. He went on to play three professional seasons in the Royals' and Pittsburgh Pirates' systems, including stops in the Carolina League for the Wilmington Blue Rocks in 2003 and the Lynchburg Hillcats in 2004.

The Fredericksburg Nationals' 2020 season begins on April 9th against the Down East Wood Ducks (Texas Rangers) at Grainger Stadium in Kinston, North Carolina. The opening day for the FredNats new ballpark will be on Thursday, April 23rd.