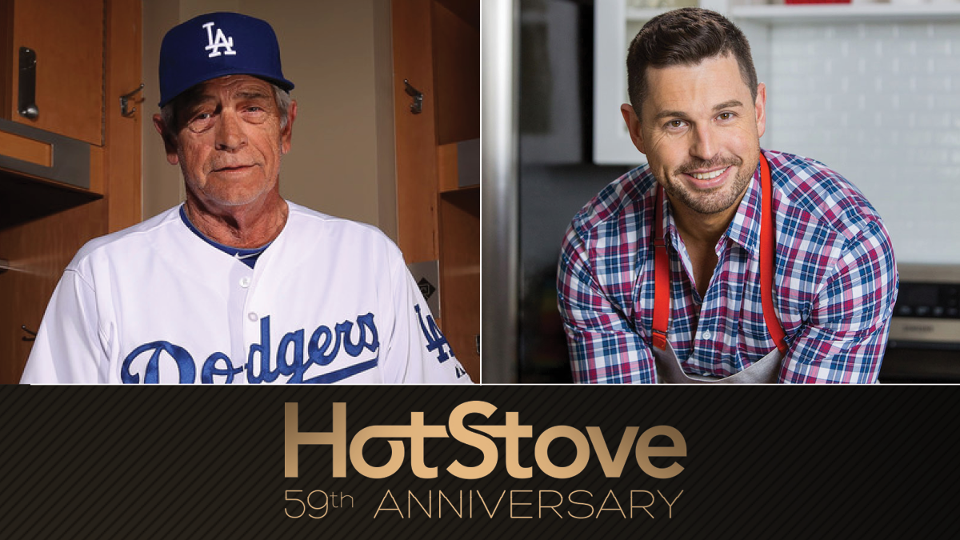 The Fresno Grizzlies announced the addition of two major names to their 59th annual Hot Stove Gala. Legendary Los Angeles Dodger Steve Yeager and Celebrity Chef Ryan Scott will join Keynote Speaker Will Clark at the event, which will take place at Chukchansi Park the evening of Friday, January 31. Tickets for the benefit gala are expected to sell out and the Grizzlies encourage people to purchase early. All proceeds will be used for much-needed renovations to multiple Central Valley youth baseball fields/facilities. Nominations for field/facility renovations are being accepted at the link above.

Yeager is a veteran of 15 MLB seasons with the Los Angeles Dodgers (1972-1985) and the Seattle Mariners (1986). Before becoming a co-MVP of the 1981 World Series, he made his professional debut for the Ogden Spikers of the Pioneer League at the age of 18. The fourth-round draft pick from Meadowdale High School in Dayton, Ohio became one of the best defensive catchers in his time playing.

With the Dodgers, Yeager was the backup to Joe Ferguson before taking over the catching reigns in 1975. He became an integral part of the Dodgers' success for many years. In 1976, he led National League catchers in assists with 77 and in 1977, was the runner-up for the Gold Glove. Yeager continued his catching prowess into the 1981 World Series, sharing the MVP. He hit two homers, one off of Ron Guidry, which turned out to be the game-winner. After his playing career ended, Yeager coached the Dodgers backstops from 2012-2018.

Renowned Celebrity Chef Ryan Scott, who was raised in Los Banos, will bring the fire to the Hot Stove. Chef Scott, a graduate of the California Culinary Academy, has cooked and learned in the kitchens of many of the country's best chefs including Gary Danko. You may recognize him from his appearances as the Emmy award-winning host on Food Rush, HSN, on Top Chef, special guest appearances on NBC's Today Show, Bar Rescue, The Rachel Ray Show, and The Talk. You can hear him weekly on his highly rated radio show, The Ryan Scott Show, on KGO 810, San Francisco Bay Area.

Yeager and Scott will join Keynote Speaker Will Clark, who was announced in September. Clark is a veteran of 15 MLB seasons with the San Francisco Giants (1986-1993), Texas Rangers (1994-1998), Baltimore Orioles (1999-2000) and St. Louis Cardinals (2000). Before compiling 2,176 hits and 284 homers in the big leagues, Clark made his professional debut with the Fresno Giants of the California League in 1985, coming to Euless Park from Mississippi State University after being selected second overall in that year's draft by San Francisco. Clark would play only 71 minor league games prior to becoming a big leaguer in 1986, 65 of which were with Fresno.

With the Giants, Clark was selected to five consecutive all-star games between 1988 and 1992, and finished top five in National League MVP voting four of five seasons between 1987 and 1991. Clark twice was the NL Silver Slugger award winner at first base, in 1989 (led league with 104 runs scored) and again in 1991 (led NL with a .536 slugging percentage and 303 total bases). During his all-star debut season of 1988, Clark led the National League with 109 RBI and 100 walks. Retiring as a player after the 2000 season having played nearly 2,000 Major League games, Clark's career ended with a .303 lifetime MLB batting average.

The annual Hot Stove Gala is organized by the Fresno Grizzlies' department of community engagement. The charitable arm of the Grizzlies is raffling off a 2020 Toyota Corolla Hybrid LE in conjunction with one of the club's major sponsors, and the winner will be drawn at the event on January 31. Tickets may be purchased for five dollars apiece or five for $20 at the Fresno Grizzlies Team store at Chukchansi Park or online at FresnoGrizzlies.com.

ABOUT THE FRESNO GRIZZLIES
The Fresno Grizzlies, Triple-A affiliate of the 2019 World Series Champion Washington Nationals, are a member of the 16-team Pacific Coast League (PCL) and one of 30 clubs in the world playing the highest level of Minor League Baseball. The team plays at Chukchansi Park in Downtown Fresno, which is also a year-round community venue, hosting a myriad of other special events beyond Grizzlies' games, such as concerts, festivals, high school baseball and over 100 non-profit community events every year. The Grizzlies enter the 2020 season - their 23rd in Fresno - on the momentum of the fifth championship in 10 years by their big-league affiliate. The team celebrated their own PCL title in 2015.