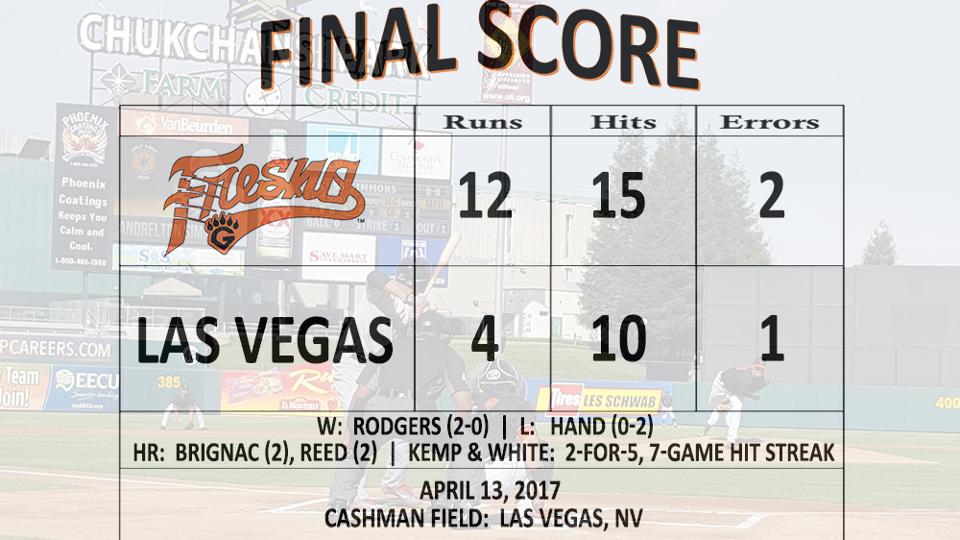 The early inning offensive fireworks continued for the Fresno Grizzlies (5-3) Thursday against the Las Vegas 51s (3-5), as a five-run second inning propelled the visitors to a 12-4 victory, surpassing the 2017 highs the Grizz set the previous night in runs (seven) and hits (14). Fresno pounded out 15 base knocks Thursday, and have out-scored the 51s 19-8 since their 21-6 loss in the series opener on Tuesday.

The most profitable offensive innings for the Grizzlies through eight games have been the first (12 runs) and the second (11 runs). A pair of five-run second innings the last two nights sets up Fresno to win their second straight series to begin the season, should they defeat Las Vegas on Friday.

Tony Kemp (2-for-5) led the game by drilling the first Fresno triple of the season to centerfield, and was promptly driven in by a Derek Fisher sac fly to center to make it 1-0. When A.J. Reed lifted his second homer of the season, an opposite-field solo shot to left, it was 2-0 Grizzlies after an inning.

Tyler White (2-for-5) and Reid Brignac (2-for-5) led off the second with singles, and each scored on a Max Stassi (2-for-5) double for a 4-0 lead. Stassi and Andrew Aplin (walk) each scored on a Teoscar Hernandez (2-for-4) infield single, Stassi on the base hit and Aplin after a throwing error at short by Amed Rosario. Preston Tucker (2-for-5) followed up with a RBI single to center, scoring Hernandez to make it 7-0.

Base hits by Kemp (batting .400, 12-for-30) and White extended their respective hit streaks to seven games, the current Fresno club-high. Kemp has at least two hits in five of his seven games. On Thursday, the Fresno lineup enjoyed six two-hit games, and every Grizz registered a hit against Vegas pitching.

The 51s added their first run on a Josh Rodriguez RBI single in the fourth. Despite the early struggles, Las Vegas lefty Donovan Hand (0-2) settled down and managed to last five innings, allowing seven runs (six earned) on eight hits, with three walks and four strikeouts.

Fresno set a new 2017-best for runs in the sixth; a Hernandez two-run triple scored Kemp following a fielder's choice and Fisher after a walk for a 9-1 advantage. After going seven games without a triple, Fresno smoked three (Kemp, Hernandez and Aplin) on Thursday. Last season, the Grizz did not have a three-triple game; they tripled twice in a game three times.

The Grizzlies continued to pour it in the seventh, when Tucker and White led off with singles, and trotted home on Brignac's second homer of the season and the series. The three-run shot to left made it a 12-1 game.

Brady Rodgers (2-0), staying true to his 2016 Pacific Coast League Pitcher of the Year form, allowed just one earned run in six innings for a consecutive start to begin 2017. He struck out three with a walk, scattering seven hits. Rodgers has allowed just 11 hits and a walk in 12 innings pitched so far (1.00 WHIP), with seven strikeouts (1.50 ERA).

Right-hander Kevin Comer followed Rodgers, making his Fresno and Triple-A debut after being summoned from Double-A Corpus Christi a day earlier. Comer set down Vegas in order in two perfect innings, with a pair of strikeouts.

A Gavin Cecchini (2-for-4) two-run double anchored a three-run academic ninth for the 51s to close the scoring. The series finale on Friday at Cashman Field will be a 7:05 p.m. first pitch.