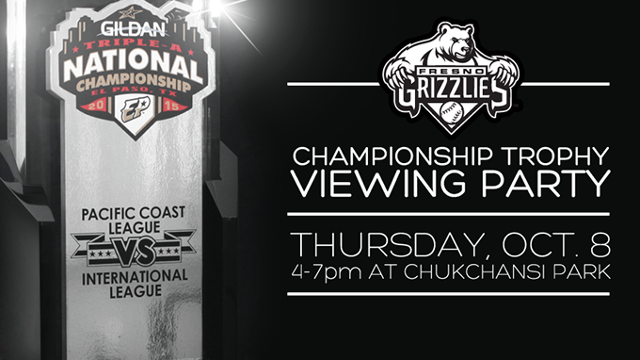 FRESNO, Calif. - To commemorate the most historic season in franchise history, the Fresno Grizzlies have announced an open-to-the-public Championship Trophy Viewing Party on Thursday, October 8th at Chukchansi Park from 4:00 to 7:00 PM. The free event marks the first opportunity for fans to experience the 2015 Triple-A National Championship Trophy, as well as purchase custom National Championship and Pacific Coast League Championship merchandise. The Grizzlies Team Store, which normally is open from Noon to 4:30 PM Monday through Friday, will not open on October 8th to the general public until 4:00 PM.

Parking for the event is free in the H Street Lot and the Gate 2 Chukchansi Park entrance opens to the general public at 4:00 PM. All 2015 Season Ticket Holders are granted early entry to the park at 3:00 PM for a one-hour VIP viewing.

Fans can take photographs with the National Championship and Pacific Coast League Championship Trophies on their smartphones or tablets, while a professional photographer will also capture the special moment and sell prints on-site for a small fee.

In addition to photo opportunities, the team encourage fans to bring their baseball gloves and a baseball to play catch on the very field that produced the 2015 National Champs, test their carnival skills in the Grizzlies' Fun Zone, and sample offerings from local Food Trucks placed throughout the park.

Those interested in 2016 Fresno Grizzlies ticket plans can speak with representatives on site and check out where their exclusive baseball view could be next season.

Those interested in bringing the 2015 Triple-A National Championship Trophy to their organization or event can contact grizzliesmedia@fresnogrizzlies.com for more information.

Fresno starter Chris Devenski didn't even give International League Champion Columbus a chance on Tuesday, September 22nd at Southwest University Park in El Paso, Texas. The right-hander, who was making his first career Triple-A start, didn't allow a hit until Audy Ciriaco led off the sixth with a single to right. Devenski finished with seven shutout innings, earned Triple-A National Championship MVP honors, and saw relievers Jordan Jankowski and James Hoyt close out Fresno's 7-0 win to set off yet another on-field celebration.

Devenski faced 22 batters over the course of his night and only went to a three-ball count once. Originally scheduled to only throw four or five innings, the Grizzlies grabbed ahold of the momentum provided by the California native who had only two Triple-A relief appearances in the PCL Championship prior to the start.

The scene in the Fresno locker room on Sunday, September 20th was one of elation. Players jumped around, spraying each other with Champagne, after producing the franchise's first Pacific Coast League championship.

"What a great feeling," Grizzlies manager Tony DeFrancesco said. "The fans supported us every playoff game. It was a huge crowd out there for every home playoff game.

"We're excited for the front office and the city of Fresno, but I can't say enough about the players. Twenty-five guys on this roster playing hard all the way through."

Behind a solid start by Astros No. 2 prospect Mark Appel and a 3-for-4 performance from 11th-ranked Tony Kemp, the Grizzlies defeated Round Rock, 7-3, in the decisive fifth game of the Finals to win the first PCL title in franchise history. The championship came one day after Fresno stayed alive with a 2-1 triumph over the Express at Chukchansi Park. Sunday's start went to Appel (1-0), the first overall pick in the 2013 Draft, and he responded with one of his strongest outings of the season. After surrendering an RBI single to Ed Lucas in the top of the first, he didn't allow another runner past second base until the sixth and struck out a career-high tying 10 batters.

The 2015 Triple-A National Champion Fresno Grizzlies, Triple-A affiliate of the Houston Astros, are a member of the 16-team Pacific Coast League and are one of 30 teams in the world playing the highest level of Minor League Baseball. The 2015 season was one of historic proportions for the team and city of Fresno, as the Grizzlies secured their first-ever Pacific Coast League Championship and went on to win the Triple-A National Championship hosted in the city of El Paso. Learn about 2016 ticket plans by calling the front office at 559.320.TIXS between the hours of 9:00 AM and 5:00 PM Monday through Friday. Visit FresnoGrizzlies.com for more information.