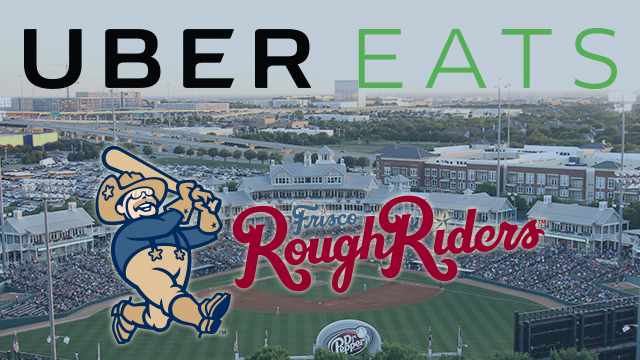 FRISCO, Texas (July 31, 2017) - The Frisco RoughRiders and UberEATS are excited to announce a new partnership allowing fans the opportunity to order concessions directly from their seats at Dr Pepper Ballpark. The one-of-a-kind venture between the RoughRiders and UberEATs is a first in professional baseball and in the state of Texas, and runs through the remainder of the 2017 season.

"Partnering with UberEATS is another innovative undertaking for the RoughRiders franchise and our fans," RoughRiders Chief Operating Officer Scott Burchett said. "We look forward to RoughRiders fans enjoying UberEATS from their homes and the convenience of their seats at Dr Pepper Ballpark."

UberEATS is a new food delivery platform that makes getting great food from your favorite local restaurants as easy as requesting a ride. UberEATS is offered throughout Dallas, Fort Worth, Arlington, Irving, Plano, Grapevine, Richardson, Frisco, Garland and Addison, and is available 24 hours a day, seven days a week.

"UberEATS is a food delivery app that makes getting food from your favorite restaurants to your family's dinner table easy," UberEATS DFW General Manager Jordan Chapman said. "We are grateful to partner with the Frisco RoughRiders to help fans enjoy their time at Dr Pepper Ballpark even more."

UberEATS also becomes the exclusive sponsor of the RoughRiders' live pregame "Riders Report," a five-minute segment shown on the left-field video board prior to each game, and receives additional promotional support throughout Dr Pepper Ballpark.

With speedy service throughout the DFW Metroplex, your favorite restaurants are just a tap away. Fans of the RoughRiders can use the promo code ROUGHRIDERS17 to score $5 off each of your first two orders.

The Frisco RoughRiders are the Double-A affiliate of the Texas Rangers and play their games at beautiful Dr Pepper Ballpark in Frisco, Texas. The team was founded in 2003 and has finished first among all Double-A franchises in attendance in each of the last 12 seasons (2005-2016). In August 2014, the RoughRiders were purchased by an ownership group led by Chuck Greenberg. The new ownership group, together with the city of Frisco, has spearheaded numerous major franchise improvements over the past two seasons, investing nearly $8 million in a wide array of facility upgrades and improvements, including a new state-of-the-art HD video board, sound system, Bull Moose Saloon, InTouch Grille, Riders Outpost Team Store and the newest and biggest creation, the 174-foot Choctaw Lazy River. The upgrades made prior to the 2015 season earned the Riders and the City of Frisco "Best Ballpark Renovation" of 2015 by Ballpark Digest. The same publication also honored the Choctaw Lazy River as the best ballpark improvement over $1 million for the 2016 season. More than 140 former RoughRiders players have gone on to play Major League Baseball, including All-Stars Chris Davis, Adrian Gonzalez, Ian Kinsler and Nelson Cruz, as well as current Rangers stars Elvis Andrus, Rougned Odor and Nomar Mazara. For more information on the Frisco RoughRiders and Dr Pepper Ballpark, please visit RidersBaseball.com or contact Art Garcia at AGarcia@RidersBaseball.com or Ryan Rouillard at RRouillard@RidersBaseball.com.