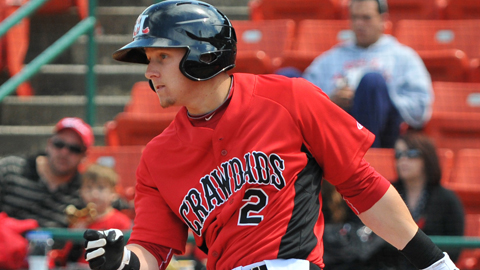 SPRINGFIELD, MO. (AUGUST 8, 2013) - The Frisco RoughRiders have received infielder Ryan Rua from the Class A Hickory Crawdads. Frisco utility player Alejandro Selen has been placed on 7-day disabled list. Rua is expected to play primarily third base for the RoughRiders.

Rua, 23, in his first season as a member of a full-season minor league team. As a member of the Crawdads, Rua has posted career highs in nearly every offensive category. He has played in a career high 104 games this season, clubbing a career-bests in hits (92), doubles (24), home runs (29) and RBI (82). Over the two previous seasons, the 23-year-old had hit 11 home runs in 126 career games. He is tied for second in the minors this season in home runs; his 29 trail only Pirates prospect Andrew Lambo (31). Rua has also drawn a career-best 49 walks this season and stolen 13 bases, the most in a single professional season in his career as well. His current .559 slugging percentage would far exceed his previous career best (.484 in 2011). Rua, a South Atlantic League All-Star selection, currently leads the circuit in home runs, extra-base hits, RBI, is second in total bases and third in the league in slugging percentage. The third-year professional has spent the majority of his playing time at second base (88) with a few at third base (8) as well as one game in left field this season.

Rua joins Alex Claudio as the second member of Crawdads to skip the Advanced-A level and come straight to Frisco this season. Drafted out of Lake Eerie College in the 17th round of the 2011 MLB June Amateur Draft, the Amherst, Ohio native split 2011 between the Rangers of the Rookie Arizona League and the Class-A Short Season Spokane Indians. He spent all of 2012 with the Indians where he played all four infield positions.

Selen, 24, is in his first season above Class A. In 61 games, Selen is hitting .222 with eight doubles, three home runs and 13 RBI. He has primarily been used as a designated hitter with seven games played in the infield and 15 in the outfield.

With the two roster moves, the RoughRiders roster contains 25 active players, which is the Texas League limit.

The RoughRiders complete their set in Springfield against the Cardinals on Thursday night at 7:09 p.m. Highly-touted Rangers pitching prospect Luke Jackson (0-0, 0.00 ERA) makes his first start for the RoughRiders.

The 'Riders return to Frisco for a six-game home stand on Tuesday, August 13 against the Cardinals. Tickets remain available and may be purchased at the Dr Pepper Ballpark box office, at www.RidersBaseball.com or by calling (972) 731-9200.