Delgado, Abbott Star in the Ninth 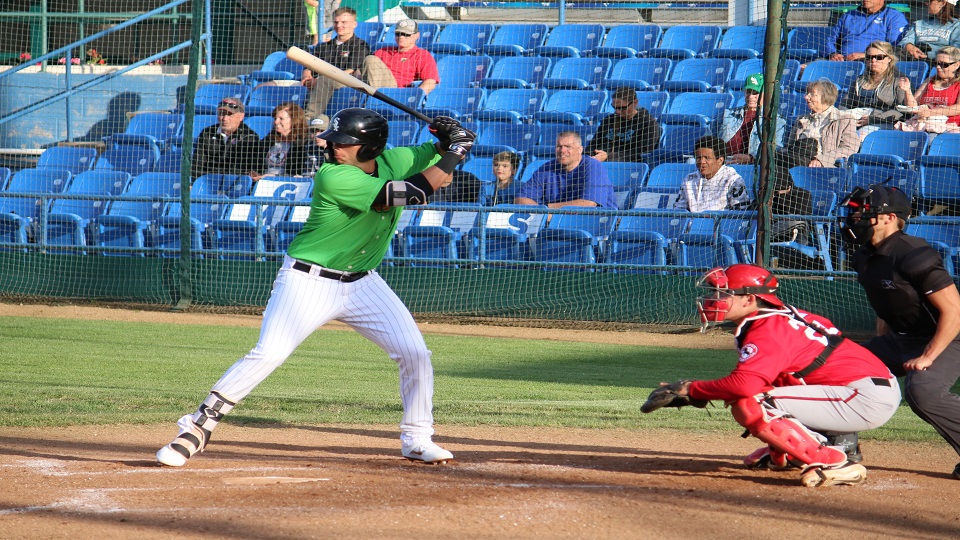 Sam Abbott capped a two-run ninth inning for the Voyagers with an RBI single to right for their second walk-off win of the season.

Great Falls, MT-The Voyagers came back from a pair of three-run deficits Saturday night before Sam Abbott delivered the game-winning base hit for an 8-7 walk-off victory over Billings at Centene Stadium.

Great Falls (16-15, 31-37) has won three in a row and improved to 19-15 at home this season. The Mustangs (21-11, 36-34) have dropped four straight, and fell to 16-20 on the road. The Voyagers are 8-10 against Billings in the season series. They are a game over .500 within the second-half for the first time since July 30th. Great Falls magic number to be eliminated from playoff contention remains at two. The Voyagers finish the month of August with a record of 13-12, their first winning month this season. The victory was the first of the season when Great Falls trailed a game after eight innings.

The Mustangs opened the game with a three-run first. Billings sent eight to the plate and the inning featured an RBI single by Victor Ruiz and a two-run double for Reniel Ozuna. The Voyagers quickly answered with a two-run home half of the first. A two-out rally was started by a Luis Curbelo single to center. Luis Mieses then reached on a double error at short. Lency Delgado trimmed the Billings lead to 3-2 with a two-run single to center.

Billings plated single runs in each of the second and third innings for a 5-2 advantage. Great Falls once again shaved the lead to one with a two-spot in the bottom of the third. Seven Voyagers came to the plate. Luis Curbelo reached with a one-out infield single to third. Luis Mieses again reached base on an infield error. With two outs, Sam Abbott walked to load the bases. Ivan Gonzalez punched a ground ball single to right and scored two runs for a 5-4 game.

The Mustangs made it 6-4 with an unearned tally in the fourth. Great Falls then broke even with a two-run fifth. Luis Curbelo led off with a single lined into left-center. Lency Delgado reached base with a hit-by-pitch. Both runners moved up to second and third on wild pitches. Sam Abbott cut the lead to one with an RBI groundout that scored Curbelo from third. A two-out Anderson Comas' RBI single to center brought Delgado in with the tying run. Billings reclaimed the lead at 7-6 in the sixth with a two-out RBI single from Reniel Ozuna.

The Voyagers were down to their final strike twice in the bottom of the ninth. Lency Delgado leveled the game with an RBI single up the right field line, and Sam Abbott won it with an RBI single roped into right for the one-run victory and their second walk-off win of the season. Caberea Weaver led off the inning with a hit-by-pitch and later scored the tying run. Kelvin Maldonado laid down a successful sacrifice bunt that moved Weaver to second. Luis Curbelo also reached base with an infield single for his first four-hit game of the season.

On the mound, Sammy Peralta picked up the win. Peralta (2-1) pitched one inning with one strikeout and one hit allowed. Francis Peguero blew his third save and took the loss. Peguero went two-thirds of an inning and allowed two earned runs on three hits.