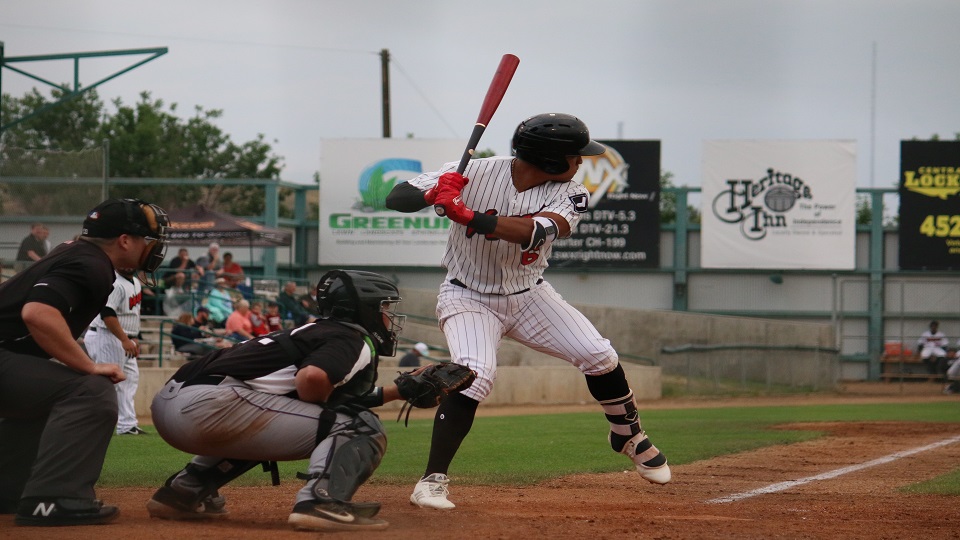 Luis Curbelo clubbed two homers and a double in a Sunday afternoon victory over first-place Billings.

Great Falls, MT-The Voyagers used a two-run home run from Luis Curbelo in the sixth inning to lift them over Billings 4-3 for a series victory Sunday afternoon at Centene Stadium.

Great Falls (17-15, 32-37) has matched a season-high with four consecutive wins, and will go for a series sweep on Labor Day. The Voyagers are 20-15 at home this season. The Mustangs (21-12, 36-35) have lost five in a row, and dropped to 16-21 on the road. The Voyagers are 9-10 against Billings in the season series. 12 of the 19 games have been decided by three runs or fewer. Great Falls magic number to be eliminated from playoff contention still sits at two. They are now 3.5 games back with five to play.

The Voyagers started the scoring in the bottom of the first with a two-out RBI single by Lency Delgado. Delgado drove in Luis Curbelo. Curbelo doubled to the gap in left-center. The Mustangs answered with a run in the second to tie it. Eric Yang coaxed a lead-off walk. Yang scored on a two-out RBI single to center for Reniel Ozuna.

Both teams clubbed solo homers in the third. Leading off the top half, Garrett Wolforth gave Billings a brief 2-1 lead on a home run to left for his first Pioneer League base hit. With two outs in the home half, Luis Curbelo smashed a solo shot of his own to deep left-center for a 2-2 tie. The Curbelo homer traveled 410 feet with an exit velocity of 104.

Great Falls surged ahead for good in the sixth. Kelvin Maldonado led off the frame with a double guided up the right field line. The very next batter, Luis Curbelo, smoked a line drive dinger over the right-center field wall for a 4-2 lead. It was Curbelo's eighth home run of the season, and it marked the second multi-homer game for a Voyager this season. Billings cut the lead to one in the seventh with a two-out RBI double by Jonathan Willems. It scored Reniel Ozuna, who had tripled with two outs.

Trey Jeans picked up his first Voyager win in relief. Jeans (1-0) worked two innings and gave up one earned run on three hits with four strikeouts and no walks. Starter Justin McGregor suffered the loss for Billings. McGregor (3-6) lasted six innings and yielded four earned runs on six hits with five strikeouts and no walks. Yoelvin Silven pitched the final two frames for his first Pioneer League save. Silven allowed two hits with one strikeout and one walk. He induced a fly-out to end the game with the tying run on at first.

Great Falls closes out the 2019 home schedule with game four against Billings Monday afternoon at 4 o'clock. Gates open at 3. For Voyagers season tickets and promotional information, call 406-452-5311 or visit www.gfvoyagers.com.