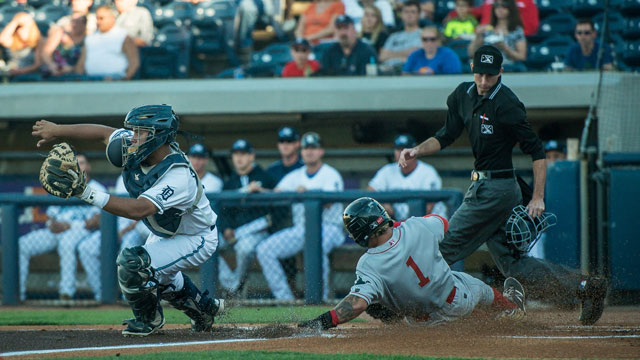 COMSTOCK PARK, Mich. - There will be a decisive final game in the Midwest League Eastern Division Championship after the Great Lakes Loons fell to the West Michigan Whitecaps on Monday night 5-3 at Fifth Third Ballpark in Comstock Park, Mich. Despite getting on the scoreboard first, the Whitecaps scored five runs in the first two innings that was too much for the Loons to overcome.

With the series now tied 1-1, the Loons and Whitecaps will meet in a winner-take-all contest Tuesday in West Michigan with the winner advancing to the MWL Championship series. It would be the first appearance for the Loons in franchise history, while the Whitecaps are the defending Midwest League champions beating the Cedar Rapids Kernels in 2015. Awaiting the winner from the East are the Clinton LumberKings, who clinched the Western Division Championship on Monday night.

The game got started with a bang when Saige Jenco singled and scored two batters later on a single by Omar Estevez. The lefty outfielder is off to a hot start in the postseason hitting .417 (10-for-24) with three doubles and four multi-hit games, while Estevez is hitting .381 in five playoff games.

But the tables were turned quickly in the next two innings as the Whitecaps jumped all over Loons starter Victor Gonzalez (L, 0-1). Four consecutive base hits from Brett Pirtle, Will Maddox, Will Allen and Arvicent Perez started the bottom of the 1st inning. Two runs came in to score in the frame, but a big double play with the bases loaded ended the threat.

West Michigan came right back with three more runs in the 2nd with three consecutive hits to begin the inning. Joey Havrilak and Allen each had RBI-doubles leading to Gonzalez's exit after just 1 1/3 innings pitched. The lefty was charged with all five runs on eight hits.

Before Sandy Baez (W, 1-0) settled into his groove for the rest of the game, Great Lakes was able to pull two runs back in the top of the 3rd. Jenco kick-started the inning with a double, followed by Brendon Davis singling to bring the Virginia Tech product in to score. After Davis was able to advance to second base on the attempt to throw Jenco out at home plate, Ibandel Isabel's RBI-single pulled the Loons within two runs. However, an inning-ending double play squashed the only major scoring threat for Great Lakes on the night.

Out of the bullpen Dean Kremer and Tony Gonsolin did their job by keeping the Whitecaps off the scoreboard throughout the rest of the game. The two righties combined for 6 2/3 shutout innings and five strikeouts.

Over the final 1 1/3 innings for West Michigan, Trent Szkutnik (H, 1) and Mark Ecker (SV, 1) only allowed one baserunner dashing the hopes of a Loons comeback.

The final game of the series Tuesday will be broadcast live on ESPN 100.9-FM as Yadier Alvarez is set to get the start for the Loons, while West Michigan will turn to Kyle Dowdy.

Coverage will begin with Chris Vosters and Matt DeVries at 6:05 p.m. EDT with the On-Deck Circle powered by Dow Corning. The broadcast will be available on over-the-air radio, online at Loons.com, and by using the Tune In app on a smartphone or tablet.

The Great Lakes Loons, hosts of the 2017 Midwest League All-Star Game, have been a Single-A partner of the Los Angeles Dodgers since the team's inception in 2007 and are in their 10th season. For tickets and more information about the Loons, call 989-837-BALL or visit Loons.com.